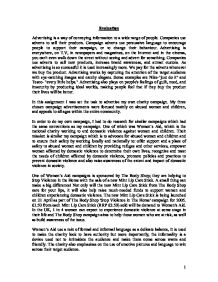 Evaluation Advertising is a way of conveying information to a wide range of people. Companies use adverts to sell their products. Campaign adverts use persuasive language to encourage people to support their campaign, or to change their behaviour.cAdvertising is everywhere, on T.V, in newspapers and magazines, on the Internet and in the cinema, you can't even walk down the street without seeing and advert for something. Companies use adverts to sell new products, increase brand awareness, and attract custom. As advertising is so successful it is used increasingly more. We pay for the adverts whenever we buy the product. Advertising works by capturing the attention of the target audience with eye-catching images and catchy slogans. Some examples are Nike-"just do it" and Tesco- "every little helps." Advertising also plays on people's feelings of guilt, need, and insecurity by producing ideal worlds, making people feel that if they buy the product their lives will be better. In this assignment I was set the task to advertise my own charity campaign. My three chosen campaign advertisements were focused mainly on abused women and children, and appeals to all ages within the entire community. In order to do my own campaign, I had to do research for similar campaigns which had the same conventions as my campaign. ...read more.

The facial expression of the young women is of someone in contemplation, which shows that she might be possibly blaming herself for the abuse. The image was taken in a house on the stair well, showing the audience that violence can affect the lives of millions of women worldwide, in all socio-economic and educational classes. Unlike abusive men, who often have specific characteristics, abused women do not fall into particular personality categories before the abuse begins. Being in an abusive situation, however, tends to trigger similar response patterns in the victims of abuse. Some women leave. But the climate of shame, uncertainty and fear "a war zone" make an abused woman less likely to take assertive action to value and protect herself, particularly if the woman comes from a family or cultural background that supports the idea of men being dominant. The second billboard with the title "It doesn't have to be like this..." shows a mid shot image of a child with a hand over his head leaning towards the stair case, with another hand above him about to hit him. There is a speech bubble next to the child saying "mummy my head hurts again", this depicts the child's thoughts, because an abused child would be too afraid to say this out aloud. ...read more.

Although I feel that the overall advertisements was a success, but there could have been room for lots of improvements. The female audience might feel sympathy for these women because of the issues addressed in the poster, because of the maternal instict.The advertisement also appealed to males as well, because it was showing the damage that thery could be inflickting upon or children. But because of the plainness of the images, it wouldn`t appeal to some men due to the fact that it is not a sexy model parading in a swimsuit. That`s why I think it had a bigger impression with female audience than the male audiences.cofg fgr sefgfgw orfg fgk infg fofg fg. Though it is a good advert, it is easy to see that by using images that will leave a lasting impact because it manipulates the audience to feeling sympathy and guilt and this will perhaps lead to them helping in some way. If my advert is compared to real charity campaign adverts it has all the conventions, it is emotional gripping, it raises awareness, informs and also educates. u4RszbY6c Visit coursework dg in dg fo dg for dg more work dg Do dg not dg redistribute u4RszbY6c ?? ?? ?? ?? 1 ...read more.