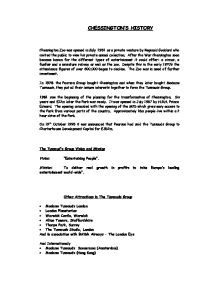 CHESSINGTON'S HISTORY Chessington Zoo was opened in July 1931 as a private venture by Reginald Goddard who invited the public to view his private animal collection. After the War Chessington soon became known for the different types of entertainment it could offer:- a circus, a funfair and a miniature railway as well as the zoo. Despite this in the early 1970's the attendance figures of over 800,000 began to decline. The Zoo was in need of further investment. In 1978 the Pearson Group bought Chessington and when they later bought Madame Tussauds, they put all their leisure interests together to form the Tussauds Group. 1981 saw the beginning of the planning for the transformation of Chessington. Six years and �12m later the Park was ready. It was opened in July 1987 by H.R.H. Prince Edward. The opening coincided with the opening of the M25 which gives easy access to the Park from various parts of the country. Approximately 18m people live within a 2 hour drive of the Park. On 19th October 1998 it was announced that Pearson had sold the Tussauds Group to Charterhouse Development Capital for �352m. The Tussaud's Group Vision and Mission Vision: "Entertaining People". Mission: To deliver real growth in profits to take Europe's leading entertainment world-wide". ...read more.

Advanced tickets reduce the queues at admissions as visitors already have their tickets and can go straight in to the Park. Promotion. Promotion of the Park happens via a number of different communication channels. Advertising. This is generally broken down into two areas, the creative production of the advert and then the choice of where to place that advert, TV, Radio, Press etc. For the year 2002 communication for Chessington will focus on the new attraction, Hocus Pocus Hall. The main creative idea is all based around 'The New Adventure Starts Here'. This new creative idea will be adapted for use on TV, Radio, Press and in Children's comics, ie The Beano. Promotions. Promotions are very import in incentivising visitors to come to the Park. The incentive is generally either a Buy One get One Free mechanic or a discount off the full adult or child price. Chessington ran promotions on it's own or in conjunction with the Tussauds Group, ie Tesco. Promotions can be run with a wide variety of partners, Esso, News of the World, KP Skips or solus via a direct mail campaign to surrounding homes. Public Relations. This area is all about getting positive exposure in the media, TV, Radio and Press. ...read more.

A Careful research is undertaken before a new attraction is bought. The attraction may be put in place to address a gap in guest numbers for a particular age range. The new attraction will encourage that element to visit the Park and therefore increase guest satisfaction. Q Are ticket prices changed when a new ride is introduced? A Ticket prices are reviewed annually. Any adjustments will consider the new attractions in the Park and other attractions in The Tussauds Group, and competition in the market place. Q How often do you introduce a new ride? A It is our intention to introduced a new attraction every year. The nature of this attraction is dependent on a number of contributing factors based on research results. Q What is the time from conception to the completion of a project? A Once a need has been identified, it may be as much as three years before the project is completed, depending on ground work and the size of the finished attraction. Q Are there any discounts or special offers? A Yes and these vary throughout the season. Discounts are available all season on those tickets that are booked in advance. Promotional offers/discounts vary throughout the year and are generally conducted with third party partners, i.e. ESSO. Q What is the company's mission statement? A "To deliver real growth in profits to take Europe's leading entertainment business world-wide". Pages 1-3 ...read more.