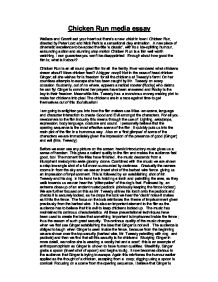 Chicken Run media essay Wallace and Gromit eat your heart out there's a new chick in town! Chicken Run, directed by Peter Lord and Nick Park is a sensational clay animation. A new piece of cinematic excellence to be added the title 'a classic', with its side-splitting humour, astounding action and stunning stop motion Chicken Run is a film well worth watching. I can guarantee you won't be disappointed! Enough about how good the film is; what is it about? Chicken Run is an all round great film for all the family. Ever wondered what chickens dream about? More chicken feed? A bigger coop? Not in the case of head chicken Ginger; all she wishes for is freedom for all the chickens at Tweedy's farm! On her countless attempts to escape she has been caught by Mr. Tweedy on every occasion. Suddenly, out of no where, appears a radical rooster (Rocky) who claims he can fly! Ginger is convinced her prayers have been answered and Rocky is the key to their freedom. Meanwhile Mrs. Tweedy has a monstrous money making plot to make her chickens into pies! The chickens are in a race against time to get themselves out of this foul situation! I am going to enlighten you into how the film makers use Mise-en-scene, language and character interaction to create Good and Evil amongst the characters. For all you newcomers to the film industry this means through the use of: Lighting, sets/props, expression, body language, costume and sound. ...read more.

Tweedy. Her body language as she comes through the door, she 'stampedes' this is a connotation of evil, the moment we are shown a medium- long shot of Ginger the music extensively changes so that it is noble; here contrast is exposed between Good and Evil. We are shown a low angle shot of Mrs. Tweedy, as we all know this is used to make audience feel susceptible from empathy towards the chickens. During this film we see any shots in which we can empathise with the characters through Mrs. Tweedy's eyes we feel strong and triumphant, although through the chicken's eyes we feel small this is reinforcing our images of Good and Evil because upon every empathy scene we either feel sorry for the chickens or against Mrs. Tweedy. Ultimately, making the chickens (Ginger in particular) seem intrepid and Mrs. Tweedy evil. As we are once again shown (from a low angle shot), Mrs. Tweedy (unlike in the opening sequence) is wearing dark, insipid clothing this is done to make Mrs. Tweedy look gloomy. The lighting on Mrs. Tweedy's face is very overcast and the clouds in the background are coloured a dull red representing fire, which I believe is supposed to make us think of the devil. When Mrs. Tweedy discovers Edwina hasn't laid any eggs, she grabs her by the neck to take her to the 'chop' Ginger exclaims 'Bunty why didn't you give her any of your eggs, 'again showing her consideration towards a fellow chicken, reinforcing that Ginger is a 'Good' character. ...read more.

This completely goes against Gingers beliefs towards escaping and we would expect her to get angry, although see stays calm. Her manner and language towards the chickens is very polite. So her light-hearted personality reinforces her good. Presentational wise, after we are shown a low-angle shot of Mrs. Tweedy where I believe she is depicted as the devil. We see Ginger; there is masses of light on her innocent face, the effect of this is to make her seem heavenly in a sense creating contrast between god and the devil (Ginger and Mrs. Tweedy). Her expressions are always innocent , combined with valiant music makes her seem heroic, a connotation of good. Finally her costume is anthropomorphised, maybe done for a way for the audience to relate to her and relate to her feelings, her costume also reinforces her goodness through the use of bright colours. The response Ginger receives from other characters is friendly to indicate she is an amiable character. In chicken run the basis of good and evil is used together with presentational devices, language and response from characters. The creation of good and evil is used to end with a fairy tale ending so that good overcomes evil. The film makers have not only been successful to create the settings and characters from scratch, which is an achievement in itself, but have also incredibly managed to create themes along side this which you will really appreciate. Anything you like whether its action, comedy or even romance, I'm sure inter wound amongst this film's superb plot there is the theme that suits you! So trust me catch a taster of these egg-cellent characters before Mrs. Tweedy gets there first! ...read more.