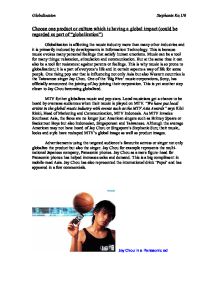 Choose one product or culture which is having a global impact (could be regarded as part of &quot;globalization&quot;).

Choose one product or culture which is having a global impact (could be regarded as part of "globalization") Globalization is affecting the music industry more than many other industries and it is primarily induced by developments in Information Technology. This is because music evokes many personal feelings that satisfy human emotions. Music can be a tool for many things: relaxation, stimulation and communication. But at the same time it can also be a tool for resistance: against parents or feelings. This is why music is so prone to globalization; it is a part of everyone's life and in certain aspects a way of life for some people. One rising pop star that is influencing not only Asia but also Western countries is the Taiwanese singer Jay Chou. One of the 'Big Five' music corporations, Sony, has officially announced the joining of Jay joining their corporation. This is yet another step closer to Jay Chou becoming globalized. MTV further globalizes music and pop stars. ...read more.

While there are rumors about collaboration between the two, Jay Chou is also guest-starring in a concert with International singer Craig David. The nationally syndicated magazine 'TIME' has also done a feature with Jay Chou. Jay Chou recently played the MGM Grand Garden Arena in Las Vegas to an audience of more than 10,000 people and there are petitions for him to hold a concert in Jakarta, Indonesia. However with every growing pop star or band, culture and heritage is being lost. As Backstreet Boys Fan Clubs grow and Britney Spears clones increase, the world is becoming a stage for pop culture and their glamorous beauty queens. The widespread distribution of "industrialized" music leads to a loss of music that exemplifies cultural aspects and characteristics; civilizations are not maintaining a sense of national pride and identity. This has been defined as a "cultural grey-out" by Lomax where cultural lines are so closely interlocked with each other that it is almost impossible to distinguish between them because they are so similar. ...read more.

EMI also reports that its received one-third of its three billion dollars in revenue has come from foreign artists and one-third of Warner's three-hundred and eighteen dollar revenues in 1980 came from non-US artists. Other problems concerning music globalization One of the major problems with music is piracy-piracy on the Internet and on the streets. Downloading stations such as 'Kazaa' promotes shared music and video files. Since a computer and Internet is so common now, if you own a computer, you are already globalized. If one person buys the real copy and allows others to download the file from him, sooner or later this fluctuates throughout cities, states and countries. The more people download for free, the more popular it gets and the longer it stays available. This not only damages stores and record companies but also the singer. The value of the global pirate market is estimated at $US 4.6 billion in 2002 with an increase of 7% in 2001. The graph below covers only commercial piracy of illegally produced and sold CDs and cassettes. It does not cover private copying by consumers or the distribution of unauthorized files on the internet. Globalization Stephanie Ko,U6 ...read more.