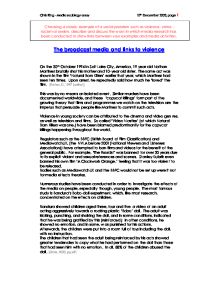 Choosing a classic example of a social problem such as violence, crime, r****m or sexism, describe and discuss the ways in which media research has been conducted to show links between your examples and media activities.

Choosing a classic example of a social problem such as violence, crime, r****m or sexism, describe and discuss the ways in which media research has been conducted to show links between your examples and media activities. The broadcast media and links to violence On the 30th October 1994 in Salt Lake City, America, 19 year old Nathan Martinez brutally shot his mother and 10-year old sister. The same act was shown in the film 'Natural Born Killers' earlier that year, which Martinez had seen ten times. Upon arrest, he repeatedly said how much he 'loved' the film. (Patten, D, 1997 [online]) This was by no means an isolated event. Similar murders have been documented worldwide, and these 'copycat killings' form part of the growing theory that films and programmes we watch on the television are the impetus that persuade people like Martinez to commit such acts. Violence in young society can be attributed to the cinema and video genres, as well as television and films. So called 'Video Nasties' (of which Natural Born Killers was one,) have been blamed predominantly for the copycat killings happening throughout the world. Regulators such as the BBFC (British Board of Film Classification) and MediawatchUK, (the NVLA before 2001(National Viewers and Listeners Association)) have attempted to ban films and videos for the benefit of the general public. For example, 'The Exorcist' was banned for over 30 years due to its explicit violent and s****l references and scenes. ...read more.

Attitudes concerning ethnic, racial and social issues were changed by movie viewing. Those movies especially containing fear and tension aroused emotions in the children. Health effects were measured by looking at the sleep patterns of children after watching the movies, and certain movies disturbed healthy sleep. Those who underperformed in school were found to have been watching more films than those at the required standard. The children displayed imitations of 'good' behaviour from certain movies but movies also appeared to play a role in delinquency. Overall, the researchers found that movies influenced both children's attitudes and behaviours. These effects were gradual but persistent over time. (Ash, R, 1999 [online]) The Payne studies have been rendered out of date now, and were criticised for their lack of control groups. Yet these went some way to showing the world the dangers of media effects, and were a landmark in such research. It is also difficult to replicate such a study today for most of the population of the earth have now been subjected to some form of media. A more recent study by Boyatzis, Mattillo, and Nesbitt in 1995 examined the effects of watching a Power Rangers television programme on video and children's aggressive behaviour. The researchers counted 140 violent acts in the half-hour show. The behaviour of the children was then observed after the show. Compared to a control group who did not see the video, the children who had seen it committed seven times as many violent acts. ...read more.

The 'Mean World' syndrome states that these people gradually become outsiders in society. This theory comes on the back of Gerbner's Cultivation Theory which suggests that the more a person is subjected to a message, the more they will start to believe it. Therefore, if people are saturated with images of violence perpetrated on others, with no punishment, they will become desensitised to this violence and have few worries about doing the same. Gerbner's methods are mostly quantitative and show no link between cause and effect. Content Analysis - counting violent events in a text does not go the step further and evaluate how these events affect the audience. He also does not evaluate the aesthetics of the text, such as lighting, camerawork and sound which accompany the images - these have a large effect on the message being given out. In conclusion, the area of media and links with violence is a broad and complex issue. Many problems are encountered when trying to prove the theories - it is extremely difficult to demonstrate that watching violent acts causes violence. Cases like that of Nathan Martinez suggest such theories have a grounding, but with science, there can be no doubt, and much research needs to be undertaken before we can ascertain what takes place in the minds of the audience. Why would certain countries in the EU ban advertisers from putting slots around children's programming? It is certain that the media has effects on people. Just exactly what they are and how effective they are remains to be seen. ...read more.