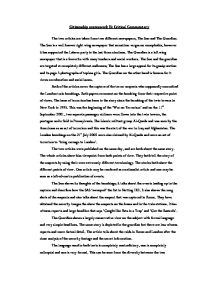 Citizenship coursework B: Critical Commentary The two articles are taken from two different newspapers, The Sun and The Guardian. The Sun is a well known right wing newspaper that sometime verges on xenophobia, however it has supported the Labour party in the last three elections. The Guardian is a left wing newspaper that is a favourite with many teachers and social workers. The Sun and the guardian are targeted at completely different audiences; The Sun has a large appeal for its gossip section and its page 3 photographs of topless girls. The Guardian on the other hand is famous for it views on education and social issues. Both of the articles cover the capture of the terror suspects who supposedly committed the London train bombings. Both papers comment on the bombing from their respective point of views. The issue of terrorism has been in the story since the bombing of the twin towers in New York in 1993. This was the beginning of the 'War on Terrorism' and on the 11th September 2001, two separate passenger airliners were flown into the twin towers, the pentagon and a field in Pennsylvania. The Islamic militant group Al-Qaeda and was seen by the Americans as an act of terrorism and this was the start of the war in Iraq and Afghanistan. ...read more.

The first key issue is the importance of the front page, as The Sun has an important Page 3 to uphold it cannot publish many things until the fourth page. This means that to attract a reader they must advertise everything on the front page by using large headlines and even larger photographs. In this case it has used a large image of a naked suspect who was reprimanded outside his flat in central London. However The Guardian is a clear broadsheet newspaper with simple headlines, and because it does not have to publish many pieces of writing inside the paper it can write most of the article on the front page and still is able to publicise other stories. The use of language in The Sun is very colloquial, it has a humorous tone which tries to judge the suspects with a headline that is a simile referring to the capture of the suspect was like being 'Caught like rats in a trap'. The Sun says that security chiefs were 'jubilant' after police captured the suspects. This shows the police in a bad light as it makes them look like they have already passed a verdict on the five suspected bombers. ...read more.

It uses an emotive piece of writing about the bombings from a victim's point of view. This shows that The Guardian although not judging the suspects in the main article, they make the reader believe that the bombing were wrong and the people who have done it should be punished. I think that The Sun shows biased views on the raids and have judged the suspects before the trail. The Guardian on the other hand is a more responsible article. It covers a large scale audience because it includes good, necessary factual information to give a clear picture. The consequences of The Sun's article may lead them to be sued for libel and this also may lead to parliamentary act by government on how these stories should be presented. The Guardians depiction of the story may not have any consequences because it does not defame anyone in its article. Based on these articles I would say that the five suspects are guilty because of the capture of Hussein Osman who was tracked to Rome. It brings up the question, why was he hiding if he did not do anything? Other people may hold different views mainly because of the way The Sun has portrayed the b**b suspects; if you call them 'Bastards' then it may lead to readers of broadsheet newspapers or left wing supporters to think otherwise. ...read more.