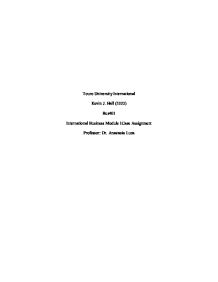 Touro University International Kevin J. Hall (5332) Bus401 International Business Module 1Case Assignment Professor: Dr. Anastasia Luca Coca-Cola Company With the fruition of globalization in the eminent future and competition for business rights in foreign markets, the absolute necessity of international business has been realized. A flexible global strategy with emphasis ultimately on a multifaceted relationship with the individual customer, employee, or partner is the key to success in this genus of business. There is no better example of dedication to globalization then the Coca-Cola Company and its success in the international community. To better understand their mastery of international business it is important to describe the Coca-Cola Company's global strategy, the importance of expanding their global presence and market share, and the rising necessity for domination in their South-East Asian assets: India specifically. Curious taste buds and a lifelong drive for invention inspired a soft drink by the name of Coca-Cola. This drive, in the late 1800's, resulted in the ever-growing, limitless, American Coca-Cola Company. ...read more.

This local, decentralized system is what drives The Coca-Cola Company's further global and market share expansion. There are still many cultures world wide that have only recently experienced Coca-Cola products. These emerging markets, for instance Vietnam or Cambodia, require strategies specific to local needs. To become part of their communities and markets, Coca-Cola must define problems in the local economy or society and tailor their activities in that market to aiding in its solution. It is this drive to aid in the hearts and minds of all men and women, that make it absolutely necessary for their global expansion. When a business giant such as Coca-Cola focuses just as many resources on aiding their targeted markets as their own product it becomes beneficial for the entire global community to allow for their expansion. Other soft-drink giants understand this concept and are creating extreme competition for Coca-Cola, but no other soft-drink company has had such a positive influence on so many different countries. ...read more.

All this plus the importance of "local knowledge, depth of experience and diverse perspectives- our business benefits immensely from the incredibly varied backgrounds and personalities of our Asian partners and employees. These are the folks who best know the people in their respective regions. And ours, after all, is a people business," stated Doug Daft. This change in mindset spurred a thirst for Coca-Cola products in India and opened a population of over one billion to The Coca-Cola Company. With influence over this part of South East Asia Coca-Cola draws closer to its soon truly global aspirations. The Coca-Cola Company's ability to adapt and overcome while having a positive influence on all of its international markets is a fine example of doing "good business". With respect and values being the corner stone of a global strategy it is easy to understand the importance of Coca-Cola's expansion into India, the rest of the South East Asian nations, and frankly the entire globe. Globalization has truly been realized. ...read more.