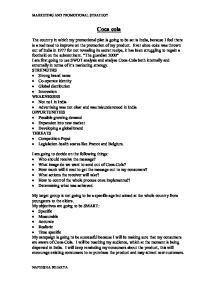 Coca cola The country in which my promotional plan is going to be set is India, because I feel there is a real need to improve on the promotion of my product. Ever since coke was thrown out of India in 1977 for not revealing its secret recipe, it has been struggling to regain a foothold on the subcontinent. "The guardian 2000" I am first going to use SWOT analysis and analyse Coca-Cola both internally and externally in terms of it's marketing strategy. STRENGTHS * Strong brand name * Co-operate identity * Global distribution * Innovation WEAKNESSES * Not no1 in India * Advertising was not clear and was misunderstood in India OPPURTUNITIES * Possible growing demand * Expansion into new market * Developing a global brand THREATS * Competition-Pepsi * Legislation-health scares like France and Belgium. I am going to decide on the following things: * Who should receive the message? * What image do we want to send out of Coca-Cola? * How much will it cost to get the message out to my consumers? * What actions the receiver will take? * How to control the whole process once implemented? * Determining what was achieved. My target group is not going to be a specific age but aimed at the whole country from youngsters to the elders. My objectives are going to be SMART: * Specific * Measurable * Accurate * Realistic * Time specific My campaign is going to be successful because I will be making sure that my consumers are aware of Coca-Cola. I will be reaching my audience, which at the moment is being dispersed in India. I will keep reminding my consumers about the product, this will encourage existing consumers to re-purchase the product and may attract new customers. ...read more.

In India, when people see their filmstars with any product it usually becomes a trend. My main aim will be put into the advertisement because TV plays a very big part in people's lives in India, from the slumps to the mansions everyone has a TV to pass time with and they worship the bollywood actor like gods, so by having bollywood's hottest actors will improve the chances of people actually absorbing the information. In the advert I will aim most of my attention to the products unique selling point rather than the actors personally. I will also let my audience know that it is affordable in price with it now being seven rupees. I will show the Indian audience that it is a MUST drink product, you cannot not drink coca cola, make them feel that they will be missing out on the wonderful experience if they don't drink coca cola. My advert will be shown during late afternoons because that is India's prime time for watching TV, they usually go out in the evening, just sitting in caf�'s or outside talking till late so I will be attracting most of the audience between 5-8pm. I will be showing the adverts atleast four times between the dramas that are played on India's most watched channel Sony and Zee TV on each channel they put their most watched dramas between these times as well so this shows that between 5-8pm is when they most attract the Indian audience and it has the highest watching rates so it is definitely the best time to put my advert on. When my advert is complete I will pilot it before it goes on television to see if I get the feedback that I'm hoping for. ...read more.

That is why making drastic changes to the colour or the name would be a disadvantage to coke. Popular brands have often been supported and developed by CATCHLINES. These phrase which seek to strengthen the identity of a brand. Coca-cola's catchline is "life tastes good". PUBLIC RELATIONS I believe that public relation is concerned with the systematic development and maintenance of mutual understanding between coca cola and its audience. "another way of looking at public relations is to say that it is concerned with developing and sustaining a positive image of the company and its products. Public relations is sometimes thought of as a supporting activity to marketing and advertising, but it is much more than this." success in advertising and promotion. Public relations will be a long term objective, I will send free messages to various groups through the activities coca cola undertakes in order to improve its reputation and maintain coca cola's positive image in majority of the countries and then change negative feelings into positive feelings. BUDGET In everyday language a budget is the amount available for spending. In business a budget is a target. The marketing budget is the quantified plan for the marketing department . for my marketing budget I have 30,500,000 rupees. First I set a marketing strategy, followed from the corporate objectives, this helped me decide on the budget needed to carry out my strategy. If it was too expensive, I took a cheaper approach, but overall their was no real problems with the budget. My budgetary cycle: * State goals * Measure performance * Analyse performance * Correct/adjust activities if necessary * Revise budgets * If necessary adjust strategy. SALES PROMOTION In India my promotional activity will be to give a free bottle of 300ml coke when they collect seven 300ml coke bottle tops. MARKETING AND PROMOTIONAL STRATEGY NAFEESHA IKHARYA ...read more.