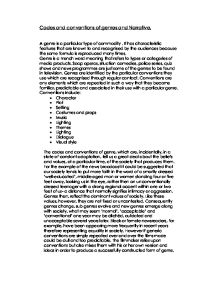 Codes and conventions of genres and Narrative.

Codes and conventions of genres and Narrative. A genre is a particular type of commodity . It has characteristic features that are known to and recognised by the audiences because the same formula is reproduced many times. Genre is a French word meaning that refers to types or categories of media products. Soap operas, situation comedies, police series, quiz shows and news programmes are just some of the genres to be found in television. Genres are identified by the particular conventions they use which are recognised through regular contact. Conventions are any elements which are repeated in such a way that they become familiar, predictable and associated in their use with a particular genre. Conventions include: * Character * Plot * Setting * Costumes and props * Music * Lighting * Themes * Lighting * Dialogue * Visual style The codes and conventions of genre, which are, incidentally, in a state of constant adaptation, tell us a great deal about the beliefs and values, at a particular time, of the society that produces them. For the example of the news broadcast it could be suggested that our society tends to put more faith in the word of a smartly dressed ...read more.

Science fiction Science fiction has been popular since the early days of cinema. Throughout a century of film making audiences have continued to show an interest in the genre, from the earliest sci-fi films which lacked in special effects to blockbuster extravaganzas, Independence day, Alien (1979) , Star Wars. Science fiction films often have strong ideological messages and representations that reflect the concerns of the society at the time of their production and usually centre around some perception of conflict between 'us' and 'them' and the positive or negative aspects of science and the future. Many of the science fiction films made in America during the 1950's - 'It became from Beneath the Sea (1955), 'The invasion of the Body Snatchers' (1956) featured invasion by aliens. The portrayal enabled people of those eras to construct more modern and futuristic views to the world. The films set standards for the iconography of the 1980s and 1990s science fiction films with its emphasis on the new technology of spacecrafts, dangerous computers with minds of their own and the use of music and image to create a sense of space and magnificence. ...read more.

The music used can be quite lively and vibrant indicating love and affection. Soap Opera The term 'soap opera' was first used in the US Depression of the 1930s to describe radio serials sponsored by soap powder manufacturers Proctor and Gable. Soap opera is an international phenomenon. Almost every country with a television station has its own soap opera, because they are cheap to produce and are popular with large audiences. Soaps begin with a 'hook' in which the threads of the storyline from the previous episode are taken up, but they also end with a cliff-hanger, in which one or more dramatic situations are left in suspense, encouraging us to view the next episode to see what happens. These cliff hangers vary in intensity and importance. The use of the cliff hanger is balanced by moments of temporary resolution in the serial, these occur for example, at Christmas or at communal occasions such as weddings or funerals. Soaps cover issues that arise in the society that we are living in, this will make the soap more successful in terms of viewers because the audiences can then therefore relate to these issues. The issues could be, relationships, health issues, teenage problems, underage pregnancy, crime, domestic violence, drugs, alcohol etc. ...read more.