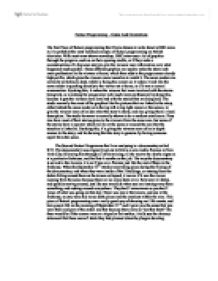 Factual Programming - Codes And Conventions The first Piece of factual programming that I have chosen to write about is BBC news as it is probably the most watched example of factual programming on British television. With most news shows nowadays, BBC news uses a lot of graphics through the program, such as on their opening credits, or if they make a reconstructions of a big news story to give the viewers more information as to what happened much quicker. These different graphics are used to make the show look more professional to the viewers at home, which then adds to the programmes already high profile, which gives the viewers more incentive to watch it. The news readers are normally sat behind a desk, which is facing the camera so it makes it look like the news reader is speaking directly to the viewer sat at home, as if it was a normal conversation. By doing this, it makes the viewers feel more involved with the stories being told, as is making the programme look much more professional by doing this, because it gets the viewers more involved with the stories that are being told. ...read more.

The way the documentary is set out to the viewers, it is as if you are a fireman just like the rest of them in the firehouse. When the September 11th attacks were taking place during the filming of the documentary, and when they were inside of the 2 buildings, or running from the debris falling around them as the towers collapsed, it was as if it was the viewer running from the scene because there are no clean shots at all, they were all shaky, and quickly moving around, just like you would do when you are running away from something, and rushing around everywhere. They had 2 cameramen so you had 2 views of what was going on that day. There was one at the towers, and one at the firehouse, so you were able to see both places and the emotions within the area. This piece of factual programming was a really good way of showing real life events, and how people felt on the morning of September 11th and it gave you the sense that you were there and part of the ordeal and that because there were no "perfect shots" like there would be if ...read more.

to telling them about that moment, because they were on the set at the time, or maybe in one of the moments that got voted for. Sometimes in the show they had the actors, and critics talking about the moment before it was shown, to give the viewers a chance to think about what the moment is, so it keeps them all guessing as to what they are talking about. In conclusion to my research I have found that factual programmes use a lot of graphics to make the differences between similar shows, and get the viewers more involved with the shows. Te shots they use tend to determine what type of show it is, whether it's a real life event, with the camera shaking, and moving quickly. Or with the tidy shots, when its purely focused on the object the program is all about. I have also found out that all programmes have, most of the time, a presenter that talks directly to the camera, to get the viewers more involved in that way, or that they have a voice over when clips of a subject is playing, and the voice over is explaining what exactly is going on. ...read more.