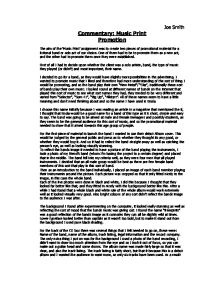 Joe Smith Commentary: Music Print Promotion The aim of the 'Music Print' assignment was to create two pieces of promotional material for a fictional band or solo act of our choice. One of them had to be to promote them as a new act, and the other had to promote them once they were established. First of all I had to decide upon whether the client was a solo artiste, band, the type of music they played (or didn't) and most important, their name. I decided to go for a band, as they would have slightly more possibilities in the advertising. I wanted to promote music that I liked and therefore had more understanding of the sort of thing I would be promoting, and so the band play their own "New Metal"/ "Ska", traditionally these sort of bands play their own music. I looked round at different names of bands on the Internet that played this sort of music to see what sort names they had, they tended to be very different and varied from "Selector", "Sum 41", "Big Up", "Allstarz". ...read more.

This would be judged by the general public and press as to whether they thought its any good, or whether they would buy it. And so it had to reflect the band straight away as well as catching the person's eye, as well as looking visually stunning. To reflect the bands image it needed to have a picture of the band playing the instruments, I took a photo of my friend's band (whom I'm basing the project to a certain degree) and placed that in the middle. The band fell into my criteria well, as they were four men that all played instruments. I decided that an all male group would be best as there are few female band members of this sort that play in this sort of band. Then as an introduction to the band individually, I placed an image of each band member playing their instruments around the picture. ...read more.

The only extra thing I put on was for the background I used a photo of the band recording, I didn't want to draw too much attention from the eye and so I took it out of focus, so you can make out a guitar head and some drums. The album name was made fairly large so that it was clear, and also the track listing. The track listing is fairly short, but that it because this is a debut album and I wanted the audience to want more, so only six tracks have been used. As a result the price will be less, charging only about �7.99 instead of the usual �12.99-�15.99 for 10+ tracks. The second piece of promotional material is a small magazine insert that would be going into such magazines as NME and melody maker. This promo is announcing the re-release of the debut album. ...read more.