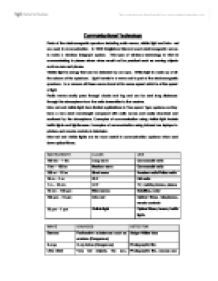 Communicational Technology Parts of the electromagnetic spectrum including radio waves, visible light and infra-red are used in communication. In 1896 Guiglielmo Marconi used electromagnetic waves to make a wireless telegraph system. This type of wireless technology is vital for communicating in places where wires would not be practical such as moving objects such as cars and planes. Visible light is energy that can be detected by our eyes. White light is made up of all the colours of the spectrum. Light travels in a wave and is part of the electromagnetic spectrum. In a vacuum all these waves travel at the same speed which is at the speed of light. Radio waves easily pass through clouds and fog and can be sent long distances through the atmosphere from the radio transmitter to the receiver. Infra red and visible light have limited applications in 'free space' type systems as they have a very short wavelength compared with radio waves and easily absorbed and scattered by the atmosphere. Examples of communication using visible light include traffic lights and lighthouses. Examples of communication using infrared are laptops to printers and remote controls to television. ...read more.

The transmitter and receiver need to be very high (e.g. on top of the BT tower) to reduce buildings, hills or the earth's curvature blocking the rays. In the UK there are 200 microwave stations each about 50 km apart to account for the earths curvature. Short wave radio waves are used to transmit TV and FM radio. The signal is sent from the transmitter on the earth's surface to geostationary satellite which is placed at the same position above the earth. The satellite reflects the signal to the receiver on a different part of the earth's surface. Short wave radio can only be sent if the satellite is in 'view' of both the transmitter and receiver, so it cannot be sent around the earth in one go. The signal is however high quality and sharp. This type of radio wave will not diffract over hills or far through buildings. Medium wave radio signals bounce off part of the earth's atmosphere called the ionosphere. They can travel long distances around the earth, but the signal is often poor due to interference. ...read more.

1990s - First transpacific optical fibre entered use which quickly transfers high quality sound. The Colour Spectrum and Filters White light is made up of many colours which have slightly different wavelengths (by combining the three primary colours - red, green and blue, you get white light). Our eyes detect the different wavelengths and our brain decodes this as a certain colour. COLOUR WAVELENGTH Red 605 - 750 nm Orange 595 - 605 nm Yellow 560 - 595 nm Green 500 - 560 nm Cyan 480 - 500 nm Blue 435 - 480 nm Violet 400 - 435 nm Wavelength is measured in nanometres (nm). White light can be separated into its different colours using prisms and/or filters. Coloured filters let through some wavelengths of light but stop others depending on the colour of the filter. For example, a green filter will only let through green light. A yellow filter will let both green and red light through as yellow light is made up of both these colours. Filters are very useful for making a receiver sensitive to one colour of light only. This means many messages can be sent at the same time - a process known as multiplexing. ...read more.