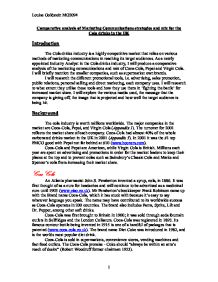 Comparative analysis of Marketing Communications strategies and mix for the Cola drinks in the UK.

Comparative analysis of Marketing Communications strategies and mix for the Cola drinks in the UK Introduction The Cola drinks industry is a highly competitive market that relies on various methods of marketing communications in reaching its target audiences. As a newly appointed Industry Analyst in the Cola drinks industry, I will produce a comparative analysis of the marketing communications and mix of Coca-Cola, Pepsi and Virgin Cola. I will briefly mention the smaller companies, such as supermarket own brands. I will research the different promotional tools, i.e. advertising, sales promotion, public relations, personal selling and direct marketing, each company uses. I will research to what extent they utilise these tools and how they use them in 'fighting the battle' for increased market share. I will explore the various media used, the message that the company is giving off, the image that is projected and how well the target audience is being hit. Background The cola industry is worth millions worldwide. The major companies in the market are Coca-Cola, Pepsi, and Virgin Cola (Appendix 1). The turnover for 2001 reflects the market share of each company. Coca-Cola had almost 40% of the whole carbonated drinks market in the UK in 2001 (Appendix 3). In 2001 it was the #1 top FMCG good with Pepsi not far behind at #10 (www.hoovers.com). Coca-Cola and Pepsi are American, while Virgin Cola is British. Millions each year are spent on advertising and promotions in order for the market leaders to keep their places at the top and to prevent colas such as Sainsbury's Classic Cola and Marks and Spencer's cola from increasing their market share. Coca Cola An Atlanta pharmacist John S. Pemberton invented a syrup, cola, in 1886. It was first thought of as a cure for headaches and will continue to be advertised as a medicinal cure until 1903 (www.ciao.co.uk). Mr Pemberton's bookkeeper Frank Robinson came up with the Brand name Coca-Cola, which it has stuck with because it's easy to say whatever language you speak. ...read more.

Coca-Cola, Pepsi and Virgin Cola all use print media. Newspapers are flexible and allow high coverage nationally and locally, with low costs. The person who reads is in control of the speed and depth of reading, but the message is usually short lived and reproduction is poor. On the other hand magazines have high quality reproduction allowing for high impact. Specialist magazines can target certain audiences and have high readership levels with moderate costs, but are also limited to the visual dimension only. Coca-Cola, Pepsi and Virgin Cola use outdoor advertising in the forms of billboards, bins, the underground, on busses and bus shelters allowing for a potentially large audience. In the case of Coca-Cola and Pepsi it's used as a support to broadcast media. There is high coverage with relatively low cost. One famous outdoor advert is the huge flashing Coca-Cola billboard in Piccadilly Circus, London. Another place for advertising is point of purchase, where high attention grabbing is needed. Often in supermarkets there'll be a big display of the whole Cola range. You will often find Coca-Cola positioned at the end of the aisle in supermarkets. In store promotions need to be attention grabbing e.g. two for one on Pepsi would force me to choose it over Coca-Cola. Coca-Cola has used the popular Harry Potter promotion to interest their younger market. The chance of winning something will influence you to buy something and this is why Coca-Cola, Pepsi and Virgin Cola all run competitions. Coca-Cola appeals to football fans with a chance to win World Cup Tickets. Music offers and tickets for events are often up for grabs as cool prizes on the three leading cola brands, this is to target their young audience. More adult promotions are often offered on diet strands of the cola e.g. Diet coke is offering a chance to win �100,000. Commemorative packaging can also lure you into buying the product. ...read more.

Steve Heyer, president and chief operating officer of Coca-Cola Ventures, is heavily involved in the pending campaign, along with Chief Marketing Officer Steve Jones, sources close to the situation said. At the same time, Coke is working on a corporate-image TV ad campaign. It would run in addition to the planned "real" brand-oriented ads. Stars who have been approached for the new campaign include Robert DeNiro, Nicholas Cage and Julia Roberts. Source: Atlanta Journal-Constitution Appendix 8 Coca Cola sport sponsorship: * Olympic games since 1928 * The Fifa World Cup since 1978 * The Rugby World Cup since 1999 * The European Football championships * Premiership on ITV * Associate of Football Association * Associate of Scottish Football Association * The English National Football team. * The Scottish National Football team * Official Supporter of the Football Association Youth Development Program * U'13s Coca Cola cup for schools in London * Coca Cola Sevens Scottish Schools' U12's * The Welsh National Rugby team * Dragons Rugby Trust (Youth Development) * The British Olympic Association Great Britain until 2008 Appendix 9 Coca Cola used telemarketing in the "Thirst For It" campaign in 1997. It was a massive on-pack promotion, with �3.5 million being spent on television, radio and national press. Customers could win a 'range of instant and dream prizes' when they purchased Coke. An outbound call campaign aimed calls at the licensed trade with the goal of placing point of sale kits. Which include T-shirts, posters, beer mats, scratch cards and a Coca Cola stand. Teledynamics completed 8,388 calls from this total of 4,500 point of sale kits were ordered. The campaign was a huge success far exceeding the expectations of Coca Cola. Appendix 10 Schweppes - A special mention here for an extinct brand. Schweppes Cola had the perfect balance of bitterness and sugar, together with a wonderful lemony zest to top it all off. Shame they stopped making it, but that might have had something to do with Schweppes becoming (for a while) the official licensed manufacturer of Coca-Cola in the UK. Louise Goldstein MG2094 1 ...read more.