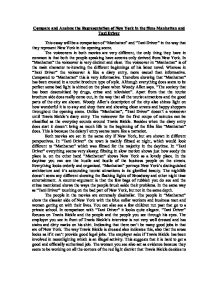 Compare and Analyze the Representation of New York in the films Manhattan and Taxi Driver.

Compare and Analyze the Representation of New York in the films Manhattan and Taxi Driver This essay will be a comparison of "Manhattan" and "Taxi Driver" in the way that they represent New York in the opening scene. The voiceovers in both movies are very different, the only thing they have in common is that both the people speaking have accents only derived from New York. In "Manhattan" the voiceover is very distinct and clear. The voiceover in "Manhattan" is of the main character re-iterating the different beginnings of his latest novel. Whereas in "Taxi Driver" the voiceover is like a diary entry, more casual than informative. Compared to "Manhattan" this is very informative. Therefore showing that "Manhattan" has been created in a tourist brochure type of style. Although everything does seem to be perfect some bad light is shined on the place when Woody Allen says. "The society that has been desensitised by drugs, crime and television". Apart from that the tourist brochure side does really come out, in the way that all the tourist attractions and the good parts of the city are shown. Woody Allen's description of the city also shines light on how wonderful it is to stay and shop there and showing clean streets and happy shoppers throughout the opening scene. Unlike "Manhattan", "Taxi Driver" doesn't a voiceover until Travis Bickle's diary entry. The voiceover for the first coupe of minutes can be classified as the everyday sounds around Travis Bickle. ...read more.

This suggests that it is hard to get a good and officially authorized job. The women you see also act as evidence because they seem to be working on all the corners of the red light district that Travis Bickle decides to drive through. This area is very squalid and all the women are like that too. Seeing this movie from a man's point of view makes the prostitutes look worse than they actually are. Martin Scorcese, the director of "Taxi Driver", makes the movie this way to show how realistic the people in the slums of New York are, furthermore under miming the way "Manhattan" depicts New York and its people. Each film has positive and negative parts in their beginnings. However it seems that "taxi Driver" is mostly negative and for the most part "Manhattan" is positive. "Manhattan" shows the more positive views through the people and the city. You se a big port and tall buildings, trees and lakes exemplifying the great and ambitious aspects of the city. The night life is no different showing an absolutely dissimilar side of New York o that shown in "Taxi Driver". With Broadway shown amongst restaurants and theatres shows people on this side of New York have expensive tastes. You see the New York skyline lit up by the various fireworks going off signifying a mood of celebrating. ...read more.

He is unemployed fresh out of the marines and doesn't seem to have much money. He lives in a dingy flat with bars on the windows and the employer he goes to see ahs a lot of people in with illegal dealings asking for jobs. Yet on the other hand as "Manhattan" only gives you brief views of places and doesn't go into that much detail. So you cannot see how the people you encounter live their lives. So I would say that "Taxi Driver" is realistic in the way that it brings out the character Travis Bickle adapting to his surroundings. You can tell this by his sort of uncaring attitude which matches that of the places he goes around. The way that "Manhattan" shows its realism is the way the people are around the camera. They seem to be getting on without bothering about anyone else which is what most people that might expect New York to be like. Also that the nightlife seems expensive and enjoyable, this is how tourist brochures would describe the town as well. In conclusion I would say that the two ways that New York is portrayed in these movies are similar in certain aspects. Although most of the values that both movies have that seem to make them popular to watch are entirely different. They both have intriguing and outstanding views with New York make both of these movies a must see and have a very high status in the movie ratings. ...read more.