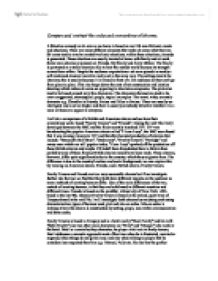 Compare and contrast the codes and conventions of sitcoms.

Compare and contrast the codes and conventions of sitcoms. A Situation comedy or sit-com as we know is based on real life non-fictional events and situations. There are many different elements that make sit-coms what they are. Sit-coms tend to revolve around two basic situations, within these situations, comedy is generated. These situations are usually located at home with family and at work. Some main sitcoms at present are Friends, My family and Alley Mcbeal. The family is portrayed as a stable situation able to bear the outside world because its strength comes from within. Despite the audience expectations a sit-com episode is mostly a self-contained classical narrative and is set in the same way. The settings tend to be interiors; this is usually because it is filmed in front of a live audience so they can't go from place to place. This also keeps down the cost of set construction and location shooting which makes sit-coms so appealing to television companies. The plots also tend to be based around very few characters. The characters themselves tend to be over exaggerated, stereotypical people, typical examples: The smart, witty, sarcastic character e.g. Chandler in Friends, Fraiser and Niles in Fraiser. There are usually un-intelligent and a not so bright, and there is usually somebody attractive whether it is a male or female to appeal to everyone. I will do a comparison of a British and American sitcom and see how their conventions work, based "Fawlty Towers" and "Friends". ...read more.

He also has the perfect image of what fawlty towers should be: successful and popular especially with the higher class. This causes him to constantly think about himself and the reputation of himself and the hotel. The humour which basil creates is usually physical; he is a tall man and walks with strides, which makes him stand out from everyone else. Sybil, Basil's wife, who seems to be authoritative and firm with Basil this maybe due to the fact that she is usually more friendly and therefore more popular with guests and staff therefore they look up to her, more so than Basil. Basil also may be afraid that she might leave him and to prevent this he tries to be kind and obeys her commands but usually frustration or confusion get in the way which may create humour. Sybil herself is an elegant and well-presented woman, the fact that she is married to Basil, who may be the complete opposite, makes the sitcom more entertaining as it causes great confusion, lack of communication which leads to arguments between the couple which all create humour in different ways. Polly is a young well-mannered girl working temporarily at the hotel. She is polite and acts respectful to guests and staff a lot like Sybil but with a lot less experience of working in a hotel. The fact that she is a lot like Sybil again causes a slight inability to communicate to Basil, as he differs greatly, especially in front of guests, which creates humour. ...read more.

Joey is a comic and youthful character as his main role in the sitcom is to create humour. This contrast of characteristics among the characters makes the sitcom more entertaining rather then them all being all the same which would make it less interesting as their lives would be similar. There are no main characters in Friends unlike Fawlty towers where the episode is normally set around Basil. In friends all of the characters are equal, there are exactly three girls and three boys and what one character has another one lacks. For example Joey is not clever but is fashionable and is a womaniser where as Chandler is clever but is not much of a womaniser. Both Friends and Fawlty Towers have the catchy theme tune in the beginning to set the scene, which gets the audience going before they start watching the sitcom. The aim of a sitcom is to make an audience laugh, by using stereotypes the viewer finds the characters funny due to them doing actions or saying something that reminds them of themselves or someone they know. The main contents of a successful sitcom are the characters, the way each character interacts with one another with a sitcom, the audience gets to know the characters, and know what to expect from them. The setting of a sitcom is generally in a similar environment that most people would go to, e.g. 'Scrubs' is based in the workplace, 'Men Behaving Badly' is set in a flat and the characters from 'Friends' either meet up in a caf� or in their apartments. . ...read more.