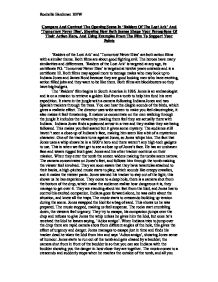 Compare And Contrast The Opening Scene In 'Raiders Of The Lost Ark' And 'Tomorrow Never Dies', Showing How Both Scenes Shape Your Perceptions Of Their Action Hero, And Using Examples From The Film To Support Your Points

Compare And Contrast The Opening Scene In 'Raiders Of The Lost Ark' And 'Tomorrow Never Dies', Showing How Both Scenes Shape Your Perceptions Of Their Action Hero, And Using Examples From The Film To Support Your Points 'Raiders of the Lost Ark' and 'Tomorrow Never Dies' are both action films with a similar theme. Both films are about good fighting evil. The heroes have many similarities and differences. 'Raiders of the Lost Ark' is targeted at any age, its certificate PG. 'Tomorrow Never Dies' is targeted at twelve years onwards and is a certificate 12. Both films may appeal more to teenage males who may look up to Indiana Jones and James Bond because they are good looking men who have exciting, action filled jobs and they want to be like them. Both films are blockbusters so they have big budgets. The 'Raiders' film begins in South America in 1936. Jones is an archaeologist and is on a mission to retrieve a golden Idol from a tomb to help him fund his next expedition. It starts in the jungle with a camera following Indiana Jones and two Spanish trackers through the trees. You can hear the diegtic sounds of the birds, which gives a realistic effect. The director uses wide screen to make you feel claustropbic, it also makes it feel threatening. It makes us concentrate on the men walking through the jungle It includes the viewers by making them feel they are actually there with Indiana. ...read more.

Bond throws the lighter across the floor and it explodes. We see a lot of aerial shots of the site showing us this is a big, important mission. We are constantly being reminded of the time until the missile hits, this makes us tense. There are rapid changes in camera shots, from the point of view of the missile, to M.I.6 to the bazaar, this is building up the feeling of urgency. Bond attacks everyone single-handedly who gets in his way, making us think he's invincible. James is calm and in control in life threatening situations. He makes his way to one of the helicopters and some of the men start to question his actions, but M has complete trust in him. Bond is made to make the other men look stupid. There's only thirty seconds till the missile hits, he starts up the engine and another helicopter starts to follow him. The music is coming to a crescendo as the missile hits. Then it suddenly stops and the screens at M.I.6 go blank and you feel suspense. Then you hear the James Bond music again and see him fly out of the explosion. A man sitting in the seat behind Bond strangles him, he has to control the plane with his knees. Bond ejects the man from his seat and the theme music starts again. James says 'Backseat driver'. He then reports back to M.I.6 that he's been successful, everyone starts cheering, Bond never looses. ...read more.

Bond cares about his appearance and he always has neat hair and expense clothes but Jones isn't bothered by fashion. Jones isn't really interested in women but Bond uses women as possessions. Both men are very focused on their jobs but Jones makes mistakes and Bond doesn't. But they are both confident about their jobs and make huge sacrifices, entering a tomb that no one had escaped and entering a terrorist bazaar alone. Both heroes are from different backgrounds, Bond is from Britain and Jones is from America, and they are from different eras, Bond is from modern times and Jones is from the 1930's. Indiana Jones is less violent than Bond, because Bond has a license to kill. Indiana has the choice of using a pistol or a whip, and he uses his whip because he doesn't want to kill but Bond doesn't think about who he kills because it's his job. The depiction of the action hero Indiana Jones is more realistic than James Bond, because the depiction of James Bond makes him seem invincible, for instance when he survives flying through an explosion. Bond and Jones aren't credible and when you're watching them you don't take everything seriously. I enjoyed both films but I preferred watching 'Tomorrow Never Dies', because it's a faster-moving action film. I liked the sound effects and the special effects of the explosions. The James Bond film was better at making the feeling of suspense up to the missile exploding and used more advanced, quick camera shots. Rochelle Hardiman 10PW ...read more.