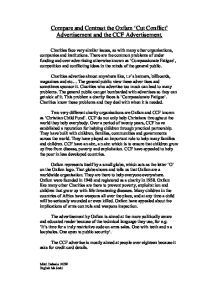 Compare and Contrast the Oxfam 'Cut Conflict' Advertisement and the CCF Advertisement. Charities face very similar issues, as with many other organisations, companies and institutions. There are the common problems of under funding and over advertising otherwise known as 'Compassionate Fatigue', competition and conflicting ideas in the minds of the general public. Charities advertise almost anywhere like, t.v`s banners, billboards, magazines and etc... The general public view these advertises and sometimes sponsor it. Charities who advertise too much can lead to many problems. The general public can get bombarded with advertises so they can get sick of it. This problem a charity faces is 'Compassionate Fatigue'. Charities know these problems and they deal with when it is needed. Two very different charity organisations are Oxfam and CCF known as 'Christian Child Fund'. CCF do not only help Christians throughout the world they help everybody. Over a period of twenty years, CCF have established a reputation for helping children through practical partnership. They have built with children, families, communities and governments across the world. They have played an important role to help many families and children. CCF have an aim, an aim which is to ensure that children grow up free from disease, poverty and exploitation. CCF have appealed to help the poor in less developed countries. Oxfam represents itself by a small globe, which acts as the letter 'O' on the Oxfam logo. That globe shows and tells us that Oxfam are a worldwide organisation. They are there to help everyone everywhere. Oxfam were founded in 1948 and registered as a charity in 1958. Oxfam like many other Charities are there to prevent poverty, exploitation and children that grow up with life threatening diseases. Many children in the countries of Africa have weapons all over the place, and at any time a child will be seriously wounded or even killed. Oxfam have appealed about the implications of arms controls and weapons inspection. ...read more.

It's a phrase, which the author writes to make the reader feel in any way, e.g. angry, sad. CCF's article starts off with an opening fact, 'Amie has a mother & father who love her...'. Amie is a loveable girls name, in French it means to love or to like. This is suppose to make the reader feel sorry, it makes the reader also read on. Amie may not even be her real name it may just be used for the advert! The fact tells us immediately that Amie has a mother and father who love her, so why does she need our help, is the question the reader asks himself/herself. Because the author cleverly ended the fact with a '...' it makes the reader think again and read on, this is done for a persuasive technique. All the paragraphs written are written in shorts sharp sentences, this makes the paragraphs more dramatic and persuasive to read. The opening paragraphs tell a short story about Amie, her parents and her life in unbelievable poverty. It explains that her parents would do anything for their little daughter. The story sets the scene on the reader, that this girl has loving parents. The next paragraph explains the food and resources Amie desperately needs. It emphasis that they do not even get a crust of bread to share. A 'crust of bread', in poor countries like the Gambia is the least food you would receive, so the advert is trying to say that they do not even receive the worst of worst foods to eat. Amie's parents work very hard to earn money they desperately need to benefit Amies needs. However hard they work they will never earn as much money. In countries in the west for example America, the more you work the more money you earn, but this is not to be for Amie's parents. ...read more.

Both the Oxfam advertisement and the CCF advertisement do this in different ways. The image of the two young girls is used in both ads and this image makes the reader feel sympathy for the cruelty inflicted upon their lives. However the main difference that there is the result implicated by mankind and the other of natural causes. We cannot but help feel sorry for both especially the young girl in the Oxfam advertisement since it is us the human race that has caused her pain and misery. The Oxfam advertisement is more powerful that of the CCF advertisement. However our sympathy also goes out to Amie since we are informed in detail about the desperate need for our help. The CCF advertisement is heavily emotional and detailed, and the sponsorship form is a clever way to influence the reader into providing help to those suffer like Amie. In my own view if I wore to choose over the two adverts I would choose the CCF because it has been well layout using the image in the middle of the page. The writing layout has been set out in a way so you are forced to look in to the image and in her eyes and feel for her. I thought that the Oxfam advert was never more persuasive enough to match the CCF advert. Although it was more powerful with the use of its facts but it never had the emotion, rhetorical questioning or any emotion towards the reader. The CCF advert makes the reader feel full of emotion for Amie and her community it had a useful payment slip where donations could be given it explained how our donations would help the poor, we would be given of the picture of the sponsored child so we know how the donation is helping and CCF wrote a thank you for reading the advert. The CCF had most of the emotion is well. But in my view the Oxfam advert could not match the cleverly written CCF advert. Mitul Dabasia 10EW English Ms Joshi ...read more.