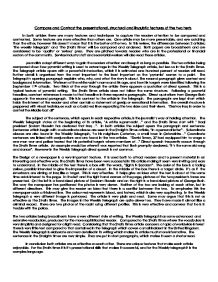 Compare and Contrast the presentational, structural and linguistic features of the two texts

Compare and Contrast the presentational, structural and linguistic features of the two texts In both articles there are many features and techniques to capture the readers attention to be compared and contrasted. Some features are more effective than others are. One article may be more presentable, and eye catching than the other, however this doesn't mean that it is the better of the two. In this review, the differences between 2 articles; 'The weekly Telegraph' and 'The Straits Times' will be compared and analysed. Both papers are broadsheets and are considered to be 'quality' or 'serious' press. They are pitched towards readers who are in the professional or financial sectors of the community. Service industry staff and secretarial workers will also read these articles. Journalists adopt different ways to gain the readers attention and keep it as long as possible. The two articles being compared show how pyramid writing is used to advantage in the Weekly Telegraph article, but less so in the Straits Times. The Telegraph article opens with a powerful introduction, which it is estimated one hundred percent of readers will read. ...read more.

and the Straits Times start with " Iraqi president Sadam Husseim has declared that Iraq...". In both articles the subject opens the paragraph and sentence. Sentences which begin with a subordinate clause are seen in the Straights Times article, "In a personal letter" . Subordinate clauses are also found in the Weekly Telegraph, "to his neighbors Carterton, a small town in Oxfordshire..." Coordinate sentences are linked with conjunctions and are found in the two articles. "David Tovey, 37 had equipped him to wage a one man war and police feared that his potenital targets where members of..." Direct speech frequently occurs through the Straits Times article. An example would be where it was reported that Bush promptly declared; "It's the same old song and dance". However in the Weekly Telegraph direct speech is not common. The Design of a newspaper is a very important feature. It is used both to attract readers and to present material in an interesting and effective way. The Straits Times have been very successful in this article making it seem very inviting and easy to understand. ...read more.

Some may argue that this is not as effective as the Straits Times. The images in the Weekly Telegraph are quite clever too. They have made it almost like a criminal record. There are two photos of the racist using different profiles. This is very effective and conveys that he is in trouble with the police. The two articles being broadsheets have a very different style of writing. The Weekly Telegraph has some advanced and extensive vocabulary, produced for the more sophisticated reader. Compared to the Straits Times where the vocabulary is very simplistic and designed for a light read. Considering that the Straits Times article concerns a topic of worldwide interest there is very little text compared to that contained in the Telegraph which covers a small incident in the United Kingdom. The Weekly Telegraph is elaborate and very detailed in its writing which makes its article much more informative. The sentences in the Straights times are very simple. They are put in short paragraphs, which makes it seem a shorter read. In conclusion both articles are as effective as each other. There are unique features that make each article enjoyable. For the Straits times it is it's presentational skills that makes it successful, and for the Weekly telegraph it is the complex language. ...read more.