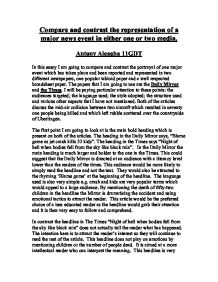 Compare and contrast the representation of a major news event in either one or two media.

Compare and contrast the representation of a major news event in either one or two media. Antony Aleagha 11GDT In this essay I am going to compare and contrast the portrayal of one major event which has taken place and been reported and represented in two different newspapers, one popular tabloid paper and a well respected broadsheet paper. The papers that I am going to use are the Daily Mirror and the Times. I will be paying particular attention to these points: the audiences targeted; the language used; the style adopted; the structure used and various other aspects that I have not mentioned. Both of the articles discuss the mid-air collision between two aircraft which resulted in seventy one people being killed and which left rubble scattered over the countryside of Uberlingen. The first point I am going to look at is the main bold heading which is present on both of the articles. The heading in the Daily Mirror says, "Blame game as jet crash kills 52 kids". The heading in the Times says "Night of hell when bodies fell from the sky like black rain". In the Daily Mirror the main heading is much larger and bolder to the one in the Times. This could suggest that the Daily Mirror is directed at an audience with a literacy level lower than the readers of the times. This audience would be more likely to simply read the headline and not the text. They would also be attracted to the rhyming 'Blame game' at the beginning of the headline. The language used is also very simple e.g. crash and kids are very popular terms which would appeal to a large audience. By mentioning the death of fifty-two children in the headline the Mirror is dramatising the accident and using emotional tactics to attract the reader. This article would be the preferred choice of a less educated reader as the headline would grab their attention and it is then very easy to follow and comprehend. ...read more.

"Night of hell") for the headline whereas the Mirrors uses oversized, uppercase letters throughout. The reader of the Times therefore will actually read and contemplate the article whilst the reader of the Mirror will simply be drawn to, and read the headline. After analysing the portrayal of the event in both of the newspapers I noticed that the Mirror seemed to be guilty of biased reporting. It was emphasised to a great extent that the dead cargo pilot was British. I feel that had the pilot been a different nationality then the article might not have appeared in the newspaper at all. The Times however, gave a gave a fair and factual account of what actually happened and did not stress that the pilot was British or concentrate on the death of adults in relation to children. I also looked at the illustrations that were provided with both of the reports. The Mirror provided two photographs of the accident whilst three photographs were published in the Times. This indicates that the Times was attempting to give the reader a wider overall picture of the accident which concurs with the comparison of the article itself. I did however feel that that the Mirror gave a better proportion of illustration to text whilst the times perhaps overdid the visual aspect. Patterns of Language In my opinion I think that the length of the sentences in an article can suggest a lot about the actual article. After reading the article in the Times I noticed that the length of the sentences was quite short and that some of the sentences seemed to be based on opinion and speculation. For example "The impact left townsfolk traumatised". In contrast the sentences in the Mirror were much longer, less opinionated and more factual. For example "Air traffic controllers said the pilot of a Russian airliner that slammed into a DHL cargo jet ignored repeated instructions to take avoiding action until it was too late". ...read more.

This leads me to believe that they know that the reader will probably just read the headline and look at the photographs so little attention has been paid to the layout of the article. Grammar and Vocabulary When looking at the headlines in both newspapers you immediately notice that the Times is written using better English with a better use of vocabulary. For example, the use of the simile "Night of hell from bodies fell from the sky like black rain," suggests superiority over the Mirror for the use of vocabulary. As you continue reading the article it becomes apparent that the Times uses a wider more challenging range of vocabulary than the Mirror, "The beautiful countryside around Lake Constance is the setting for a cluster of residential schools" is a good example. This also show s that the readers of the Times are more interested in the bigger picture and like to be told about the surrounding area, not just the incident itself. The Times also goes on to discuss previous post war incidents in the area, which are not mentioned in the Mirror. The Mirror tends to be more to the point and reports in a straightforward manner about the incident and those people affected using simple, popular language and quotations from witnesses. For example "Kills 52 kids". It does not go on to describe the area and it's history. This shows that the readers of the Mirror want a simple account of the incident with no enhancements or additions. In conclusion I feel that the Times is newspaper directed at a well educated audience with an interest in world events whilst the Mirror is directed at a wide ranging audience of working class people who simply want an overview of news that affects them and their country. The Times uses greater factual knowledge, better language and a wider range of vocabulary, which is also directed at a better educated audience and gives a well-rounded, well-organised view of events. The Mirror in comparison is much less well organised and present a more biased view of events to its audience. ...read more.