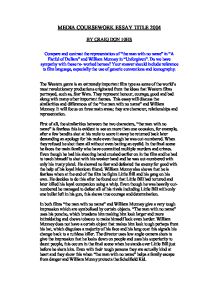 MEDIA COURSEWORK ESSAY TITLE 2004 BY CRAIG DON 10HS Compare and contrast the representation of "the man with no name" in "A Fistful of Dollars" and William Munney in "Unforgiven". Do we have sympathy with these re- worked heroes? Your answer should include reference to film language, especially the use of generic conventions and iconography. The Western genre is an extremely important film type as some of the world's most revolutionary productions originated from the ideas that Western films portrayed, such as, Star Wars. They represent honour, courage, good and bad along with many other important themes. This essay will discuss the similarities and differences of the "the man with no name" and William Munney. It will focus on three main areas; they are character, relationships and representation. First of all, the similarities between the two characters, "the man with no name" is fearless this is evident to see on more than one occasion, for example, after a few bandits shot at his mule to scare it away he returned back later demanding an apology for his mule even though he was out-numbered. When they refused he shot them all without even batting an eyelid. ...read more.

The maintenance of their macho appearance induces others to feel intimidated by these characters. If "the man with no name" continues living the life he currently has it will become predictable that in the future he will probably turn out to be the same as William Munney. They have the same characteristics such as being fearless and acting extremely tough and they are both bounty hunters who search for money. The similarities have now been discussed and it is necessary to endeavour to talk about the differences between "the man with no name" and William Munney. First of all, the way in which the characters change throughout their concerned films. "The man with no name" changes in a good way when we first see him he allows a child and his father to be abused by a group of men so we distinguish him as being bad and uncaring. Later on in the film "the man with no name" aids a family in escaping from the town and defeats a group of bandits who were causing trouble so we now distinguish him as being good and caring. ...read more.

In "A Fistful of Dollars" the relationship between "the man with no name" and his Mexican friend is different from the relationship between William Munney and the Scholfield Kid in "Unforgiven". "The man with no name" shows respect to his friend as he allowed him to stay in his Inn but omits to show compassion, when his friend is being beaten up he does not react and just watches as the beating continued. On the other hand William Munney does show his sympathy for the Scholfield Kid because after he kills a man for the first time William Munney comforts the Scholfield Kid and reassures him that everything will work out in the end. So in conclusion from all of the information that is collated in this essay "the man with no name" and William Munney do have certain aspects of their character that are the same and some that are different. The main bulk of this essay concentrates on the character and indicates that "the man with no name" and William Munney are incredibly similar and with only a minority of characteristics differing. The main point to be remembered from this essay is if they do some good or bad along the way they only do it for their primary objective, which is to make money. CRAIG DON 10HS ...read more.