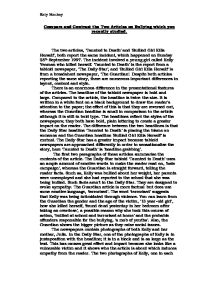 Compare and Contrast the Two Articles on Bullying which you recently studied.

Compare and Contrast the Two Articles on Bullying which you recently studied. The two articles, 'Taunted to Death' and 'Bullied Girl Kills Herself', both report the same incident, which happened on Sunday 28th September 1997. The incident involved a young girl called Kelly Yeoman who killed herself. 'Taunted to Death' is the report from a tabloid newspaper, 'The Daily Star', and 'Bullied Girl Kills Herself' is from a broadsheet newspaper, 'The Guardian'. Despite both articles reporting the same story, there are numerous important differences in layout, content and style. There is an enormous difference in the presentational features of the articles. The headline of the tabloid newspaper is bold and large. Compared to the article, the headline is twice the size. It is written in a white font on a black background to draw the reader's attention to the paper; the effect of this is that they are reversed out, whereas the Guardian headline is small in comparison to the article although it is still in bold type. The headlines reflect the styles of the newspapers; they both have bold, plain lettering to create a greater impact on the reader. The difference between the two headlines is that the Daily Star headline 'Taunted to Death' is placing the blame on someone and the Guardian headline 'Bullied Girl Kills Herself' is mutual. The Daily Star has a greater impact because tabloid newspapers are approached differently in order to sensationalise the story, here 'Taunted to Death' is 'headline grabbing'. ...read more.

The word 'Hounded' implies a chase and is metaphorical in the respect that it shows that she was bullied. Only two conversations are in bold and italic in the Daily Star. These two quotes' are in bold because they are the most dramatic this is due to the fact that the newspaper wanted to highlight these quotations because they were from Kelly's family, so they are focusing on the family's emotions in order to create a sensational approach to the story. The Daily Star mainly consists of quotations and conversations to be evidence for the reader to how people are feeling to gain their sympathy. The quotations in the Daily Star are heart felt. "My daughter has been hounded to death. I don't know why they did such things". By using the word 'hounded', Kelly's father is implying that his daughter was pursued and harassed. The article is comprised of mainly quotations from family members, so the reader can see how they have had to cope with the loss of their daughter, and so they are sympathetic. The quotes are melodramatic. "I've had enough of this. I'm going to take an overdose". Kelly said this to her mother. The Daily Star concentrates on the attack and the suicide and has used these quotations from family members to create a sensational account. The Guardian only has a few quotes of family members and a great deal from outside agencies. ...read more.

The sentence structure in the Guardian is complex. "Pauline Hasler, director of the Anti-Bullying Campaign, which was formed in 1985, said many schools did not take a hard enough line against bullying". This is classified as a complex sentence. The subject throughout this sentence is Anti-Bullying; there are two objects, Pauline Hasler and schools in general. Punctuation joins three short statements together to form this complex sentence, whereas, the Daily Star tends to rely on simple sentences. "My daughter has been hounded to death." It is simple but striking. It is simple because it contains a subject a verb and an object. Another example of a simple sentence is "Manslaughter charges could be brought if it is believed she was driven to kill herself". The Guardian appeals to the more educated person with a better command of the English language, as it is a broadsheet newspaper. The vocabulary and style of language is more complex than a tabloid newspaper. The two newspapers are to suit different audiences and that is shown in the amount of fact and opinion in each article. The Daily Star is based on opinion whereas the Guardian takes a more factual approach. Although, they both try to grab the attention and sympathy from the reader. The Daily Star does this more successfully than the Guardian, the qualities of which lie in it's broader range of facts and interviews with outside agencies which raise important issues beyond the immediate story of the suicide. Overall there is an element of class distinction which is related to the reader and their intellectual capability. Katy Mackay ...read more.