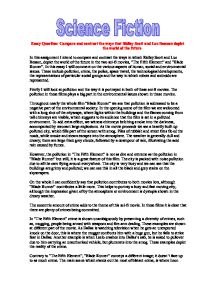 Compare and contrast the ways that Ridley Scott and Luc Bessson depict the world of the future.

Essay Question: Compare and contrast the ways that Ridley Scott and Luc Bessson depict the world of the future In this assignment I intend to compare and contrast the ways in which Ridley Scott and Luc Besson, depict the world of the future in the two sci-fi movies, "The Fifth Element" and "Blade Runner". In this essay I will comment on the various aspects of human, social and environmental issues. These include pollution, crime, the police, space travel, the technological developments, the representations of particular social groups and the way in which robots and androids are represented. Firstly I will look at pollution and the way it is portrayed in both of these sci-fi movies. The pollution in these films plays a big part in the environmental issues shown in these movies. Throughout nearly the whole film "Blade Runner" we see that pollution is addressed to be a negative part of the environmental society. In the opening scene of the film we are welcomed with a long shot of the cityscape, where lights within the buildings and the flames coming from tall chimneys are visible, which suggests to its audience that the film is set in a polluted environment. ...read more.

This helps to portray a busy and fast moving city, although the impression given of by the atmosphere or environment is dystopia shown in the dreary weather. The eccentric amount of crime adds to the theme of this sci-fi movie. In these films it is clear that there are plenty of crimes being committed. In "The Fifth Element" crime is shown unambiguously by presenting a diversity of crimes, such as, mugging, people being armed with weapons and fire-arm dealing. These examples are shown at different part of the movie. As Dallas is watching television when he gets an unexpected knock on the door, this is where the mugger confronts him with a huge gun, but he fails to strike fear in Dallas. Another example is when Leelo crashes into Dallas's cab, he is asked to pullover due to him carrying an unauthorised vehicle, but plummets into the smog. These examples depict the reality of the crime. Contrary to "The Fifth Element", "Blade Runner" conveys a different image; it doesn't face up to as much crime. ...read more.

Transport and futuristic forms of space travel contributes to the two movies a lot. "Blade Runners'" main development in space travel is the big spacecraft which can fire nuclear missiles, and is gigantic. The other obvious ones are the flying cars. We do not see any aircraft traffic as the cars over right the space for any modern aircrafts to be addressed. The movie conveys reality in its vehicles by contrasting between 21st century cars and modern day transport, due to its flying mechanism and electronic features. The modern flying cars have wheels which illustrates to the audience that they work on the ground, as well as in the air, which depicts a positive progress in the technological developments. "The Fifth element" fails to incorporate the advances of transport, the most developed vehicle in this movie is the flying cars, which are predictable and derivative which is a negative element of the movie. Ridley Scott and Luc Besson depicted the world of the future by increasing the technological developments employed throughout the film and exemplifying them in a realistic way. ...read more.