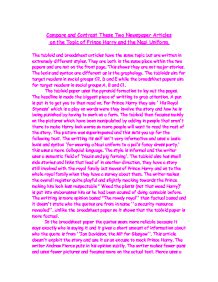 Compare and Contrast These Two Newspaper Articles on the Topic of Prince Harry and the n**i Uniform.

Compare and Contrast These Two Newspaper Articles on the Topic of Prince Harry and the n**i Uniform. The tabloid and broadsheet articles have the same topic but are written in extremely different styles. They are both in the same place within the two papers and are not on the front page. This shows they are not major stories. The lexis and syntax are different as is the graphology. The tabloids aim for target readers in social groups C2, D and E while the broadshhet papers aim for target readers in social groups A, B and C1. The tabloid paper uses the pyramid formation to lay out the pages. The headline is made the biggest piece of writting to grab attention. ...read more.

The style is informal and the writer uses a semantic field of 'Nazis and pig farming'. The tabloid also has small side stories and links that lead of in another direction, they have a story still involved with the royal family but moves of Prince Harry and on to the whole royal family when they have a survey about them. The writer makes the overall register quite playful and slightly mocking towards the Prince making him look less respectable " Weed the plants (not that weed Harry)" is put into embarasses him as he had been acused of doing cannabis before. The writting is more opinion based "The rowdy royal'' than factual based and it doesn't state who the quotes are from in name ''a security resource revealed''. ...read more.

Pierce took a different perspective on this story and didn't focus on Harry so much but spread the story wider to cover the whole of the royal family questioning them politaclly and morally. "Plans by German politicians ..... could cause further embarrassment for the Royal Family" This shows that the braodsheet paper is taking things into more depth. The graphology is plainer with just the headline, the text and a small picture making you focus more on the actual text. The overal register is more serious and truthful. The broadsheet paper and tabloid papers are on two very different levels. The broadsheet is more in depth and formal, while the tabloid is more informal and uses a more colloquial language. This shows the different styles of writting used and the different layouts. ...read more.