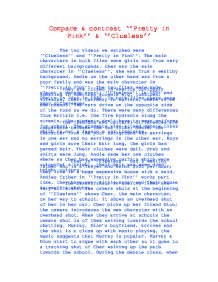 Cher picks up her friend Dion; the camera introduces the new character with an overhead shot. When they arrive at schools the camera shot is of them walking towards the school chatting. Murray, Dion's boyfriend, arrives and the shot is a close up with music playing, the music suggests that Murray is popular. Murray & Dion start to argue with each other so it goes to a tracking shot of Cher walking up the path towards the school. During the debate class, when Cher is speaking, a tracking shot films down the class, it takes no one taking any notice of her or the lesson. The introduction of ''Pretty in Pink'' shows tracking shot moving up Andies leg, as it moves up it suggests Andies style and personality. It shows Andie making her toast, compared to Cher in ''Clueless'' who has a maid to make her breakfast. ...read more.

''Pretty in pink'' starts with silence as the title is on the screen, this was the first film which did this. The music starts when we see Andie. As the dialogue begins the music starts to fade. The scene which shows Andie at school the music is playing loud. The music changes when Duckie arrives and as the students enter the classroom, the music fades and the dialogue starts. I enjoyed both films but I preferred ''Clueless''. The colours in this film were much brighter than the colours in ''Pretty in Pink''. I thought that ''Pretty in Pink'' wasn't as good because the film was a bit dull and this made the film look less exciting. The reason why the shots in each film look different is because the camera technology is very different because the films were made just under a decade apart. With the camera shots being different it makes the film look a lot better and the camera angles looking a lot more advanced. Joe Coggin ...read more.