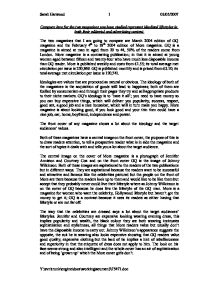 Compare how far the two magazines you have studied represent idealised lifestyles in both their editorial and advertising content The two magazines that I am going to compare are March 2004 edition of GQ magazine and the February 4th to 18th 2004 edition of More magazine. GQ is a magazine is aimed at man in aged from 20 to 44, 50% of the readers come from London. More magazine is a contrasting publication; in that it is aimed at young women aged between fifteen and twenty-four who have much less disposable income than GQ reader. More is published weekly and costs from �1.55; its total average met circulation per issue is 250,869. GQ is published monthly and is priced from �3.10; its total average met circulation per issue is 120,741. Ideologies are values that are promoted as natural or obvious. The ideology of both of the magazines is the acquisition of goods will lead to happiness; both of them are fuelled by consumerism and through their pages they try and sell appropriate products to their niche markets. GQ's ideology is to 'have it all'; you need to have money so you can buy expensive things, which will deliver you popularity, success, respect, good sex, a good job and a nice house/car, which will in turn make you happy. More magazine is about looking good, if you look good and your thin then could have a nice job, car, home, boyfriend, independence and power. The front cover of any magazine shows a lot about the ideology and the target audiences' values. ...read more.

More magazine is much more inclusive, it talks to you as an equal like an older sister or more experienced friend, it talks to you in such a way that you feel that it has your best interests at heart so you buy in to the lifestyle because you feel that it would be the best thing for you to do. The adverts are a way in which manufacturers use the 'trust' you have built up with the magazine tries to sell you a product in an attempt to get the lifestyle that the magazine promotes. The adverts in each magazine are put there because they appeal to the niche audience. In GQ magazine they advertised for Burberry, a very expensive, classy designer label, all things that the GQ man values. In More magazines there is an advert for Rimmel make up, a budget label, which is in a More readers price bracket. The central image of this advert is of the super model Kate Moss where as the Burberry advert is of unknown models. The reason why Kate Moss is used is because every one knows her which a useful selling tool in a magazine that is obsessed with celebrity but also she is good looking, successful, glamorous, 'real' and rebellious. Both of the adverts use the concept of breaking the mould, though the way that the Burberry advert does this is much subtler than it is in More. The Burberry advert, at first glance shows a traditional, black and white, 1960's family portrait of a woman, two men and a young child with ...read more.

More's article are mostly easy to read and do not go out of the readers own experiences where as GQ are more prepared to go out of the readers original knowledge and teach them something such as in the news and current affairs, for example "Guantanamo Bay's guilty secret". One article that seems to capture the essence of the GQ lifestyle is in the editor's letter, the same can be said for in More magazine. GQ magazine talks to you as if you are a competitor in quite a boisterous manner and confides in the reader in quite a boasting way but does create familiarity so you don't fell alienated. More talks to you as if you are a younger sister or a less experienced friend, it doesn't talk down to the reader but it does tell you things in such a way that you feel that it is in your best interests to listens and do as they say. More speaks to you in a very inclusive way and the way that you are told about office scenarios makes you feel part of their friendship group. The letters both have different styles, GQ's editors letter is written in quite formal English to imply intelligence and even goes as far as to include some French words. More is informal to set the relaxed style of the rest of the magazine. Both of them use colloquiums, GQ only does this occasionally and on words used in normal convocation, e.g. 'cool'. More magazine uses colloquiums much more frequently to try and include the read by using their method of speech. ...read more.