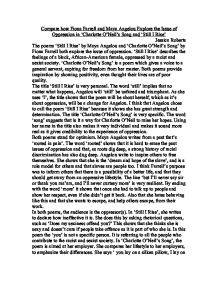 The poems ‘Still I Rise’ by Maya Angelou and ‘Charlotte O’Neil’s Song’ by Fiona Farrell both explore the issue of oppression. ‘Still I Rise’ describes the feelings of a black, African-American female, oppressed by a racist and sexist society. ‘Charlotte O’Neil’s Song’ is a poem which gives a voice to a general servant, aspiring for freedom from her master. Both poems provide inspiration by showing positivity, even thought their lives are of poor quality.

The title ‘Still I Rise’ is very personal. The word ‘still’ implies that no matter what happens, Angelou will ‘still’ be unfazed and triumphant. As she uses ‘I’, the title shows that the poem will be about herself, which as it’s about oppression, will be a change for Angelou. I think that Angelou chose to call the poem ‘Still I Rise’ because it shows she has great strength and determination. The title ‘Charlotte O’Neil’s Song’ is very specific. The word ‘song’ suggests that is it a way for Charlotte O’Neil to raise her hopes. Using her name in the title also makes it very individual and makes it sound more real as it gives credibility to the experience of oppression.

Both poems stand for optimism. Maya Angelou writes from a past that’s ‘rooted in pain’. The word ‘rooted’ shows that it is hard to erase the past issues of oppression and that, as roots dig deep, a strong history of racial discrimination has also dug deep. Angelou write to inspire others to free themselves. She shows that she is the ‘dream and hope of the slave’, and is a role model for others and that slaves are people too. I think Farrell’s purpose was to inform others that there is a possibility of a better life, and that they should get away from an oppressive lifestyle. The line ‘but I’ll never say sir or thank you ma’am, and I’ll never curtsey more’ is very resilient. By ending with the word ‘more’ it shows that once she had to talk up to people and show her respect, even if she didn’t get it back. Also that she hates behaving like this and that she wants to escape, and help others escape, from their work.

In both poems, the audience is the oppressor(s). In ‘Still I Rise’, she writes to declare how ineffective it is. She does this by asking rhetorical questions, such as ‘Does my sexiness offend you?’ This shows that she thinks she is sexy and doesn’t care if people take offence as it is part of who she is. In this poem the ‘you’ is not a specific person. It is referring to all the people who contribute to the racist and sexist society. In ‘Charlotte O’Neil’s Song’, the poem is aimed at her employer. She compares her lifestyle to her employers, to emphasize their differences. She says ‘ you lay on a silken pillow, I lay on an attic cot.’ The difference in quality, and price of an ‘silken pillow and an ‘attic cot’ shows that Farrell believe that the oppressor has a better lifestyle. It also shows their inequalities. Because she is a servant, her employer gives her a lower standard of living.

‘Still I Rise’ follows a very regular structure. The first seven stanzas all have four lines, and follow the rhyme scheme ABCB. This creates the effect of a very rhythmical poem, and the words stay in your mind easily, as it flows, making it easier to remember her message. This structure is an indication as to how her life was controlled in the past. In the last two stanzas, she changes to present tense; ‘I rise’, as appose to ‘I’ll rise’. This shows that she is taking control and is free from the oppression. The rhyme scheme also changes to ABABCC and then ABABCCDDD. This shows that she is taking advantage of her freedom to change. The last two verses are very different to the first seven. The sentences become shorter, controlled with longer phrases between them. This shows that she has escaped the oppression at the end and can not keep up the control as she is so happy.

The rhyming pattern is constantly changing in ‘Charlotte O’Neil’s Song’. The first verse starts with ABCCB, then moves onto ABCBDDBCD. Verse three then changes to ABCDDC, ending with ABCDCEEC. Each verse is changing as it is describing one part of her life. The first two stanzas are allabout what she has done; ‘I polished’, showing her life before she had any control over it. The last two verses are about what she will do now she has escaped her oppressor; ‘And I’ll eat when I please’. This quotation shows that she is taking action and retaliating. This changing, yet song-like structure makes the poem energetic yet determined, making the point that she was oppressed easy to understand.

In Angelou’s poem there is a repetition of the words ‘Still I Rise’. This is to get the words to stick in your head, and also to show that she will rise no matter what. It also shows that her fight with society is ongoing and that she is constantly having to rise above the oppression.

The poem is also full of similes and metaphors. Every stanza contains at least one metaphor. ‘Just like moons and suns’ shows that rising is certain, just as certain as the moon and the sun, and also that she is natural, like these things. Angelou uses three similes relating to the world riches; ‘That I dance like I’ve got diamonds, At the meeting of my thighs’. This shows that she believes that she is also one of the worlds rare and beautiful riches. ‘Cause I walk like I’ve got oil wells, pumping in my living room’ shows that she is rare and natural like oil. ‘Cause I laugh like I’ve got gold mines, Diggin’ in my own back yard’ shows that she is natural as well, but it also uses incorrect grammar. By using ‘diggin’’ and ‘‘cause’, she has shortened the words to make them her own. This makes the words more personal, and shows that she refuses to change for others. Also it makes you think that as she is a slave, she probably didn’t have a proper education, so wouldn’t have been taught how to speak correctly anyway. ‘Does my sassiness offend you?’ shows strength over her oppressor. By asking this rhetorical question she is showing that she doesn’t care if she is as she doesn’t want to change who she is, even though she is a slave.

In ‘Still I Rise’ her tone is very cheerful. This shows that she is unfazed by the oppression and is still positive. I think it also makes her sound quite arrogant as she believe that she is better than everyone else.

Angelou ends the poem positively. ‘Into a daybreak that’s wondrously clear’ shows a fresh start, like a new day. ‘Bringing the gifts my ancestors gave’ is inspiring to other slaves. It shows that others should be proud of who they are, and overcome their oppressors, like she has.

Farrell’s poem does not contain any similes, metaphors. This is because it is written like a song, and the similes and metaphors wouldn’t fit into the style of writing.

It also doesn’t contain any informal language. I think this is because she is trying to differ herself from her oppressed past, so she is choosing to speak formally, as if to become a better person.

Farrell repeats the word ‘and’ at the beginning of lines. ‘And I washed your plate, And I scrubbed’ . This makes the list of jobs to do sound longer and more demanding. She also uses the rule of three; ‘washed, scrubbed, cleaned.’ This is to press the issue that she worked very hard at her job. As all these words are verbs, it shows that she did a lot of labour work.

In ‘Charlotte O’Neil’s Song’ her tone is calm but defiant, using sentences such as ‘But I’ll never say ‘sir’ or ‘thank you ma’am’ and I’ll never curtsey more.’ This shows that she was always polite but is now free from her oppressor.

Both poems have a point where you can tell they are free. When Farrell starts her stanza ‘but’, it shows that O’Neil is becoming more confident and is now in control of her life. In Angelou’s poem this is done when the tense changes from ‘I’ll rise’ to ‘I rise’. This shows that she is taking action.

‘Still I Rise’ and ‘Charlotte O’Neil’s Song’ are both about very determined women. They have both been oppressed, be it by their employers or society, and yet are ‘still’ optimistic and have the strength to overcome their oppressors and escape to a better value of life.