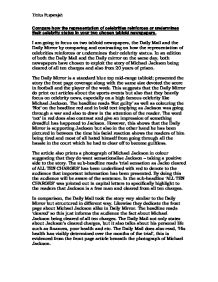 However, this shows that the Daily Mirror is supporting Jackson but also in the other hand he has been pictured in between the time his facial reaction shows the readers of him being tired and most of all hated himself from going through all the hassle in the court which he had to clear off to become guiltless. The article also prints a photograph of Michael Jackson in colour suggesting that they do want sensationalise Jackson - taking a positive side to the story. The sub-headline reads 'trial sensation as Jacko cleared of ALL TEN CHARGES' has been underlined with red to denote to the audience that important information has been presented. By doing this the audience will be aware of the sentence. ...read more.

The Daily Mail does also read, 'His health has visibly determined over the months of the trial', this is evidenced from the front page article beneath the photograph of Michael Jackson. However, both newspapers depend heavily upon the importance of celebrity stories. The layout, colours, use of language and etc, has been applied in both newspapers very differently. As a result after analysing both newspapers, both newspapers supported him. This is because both tabloid newspapers do not comment on his personal life whenever he was judged wrong, but also they don't discuss neither about him as being suspicious on him or try to show that he is guilty. Therefore it seemed to be as a reader that the Daily Mail and the Daily Mirror reinforces Michael Jackson rather than undermine him. ?? ?? ?? ?? Tinius Pusparajah ...read more.