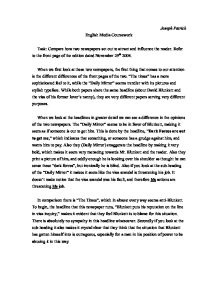 Compare how two newspapers set out to attract and influence the reader. Refer to the front page of the edition dated November 29th 2004.

Joseph Patrick English Media Coursework Task: Compare how two newspapers set out to attract and influence the reader. Refer to the front page of the edition dated November 29th 2004. When we first look at these two newspapers, the first thing that comes to our attention is the different differences of the front pages of the two. "The times" has a more sophisticated feel to it, while the "Daily Mirror" seems trendier with its pictures and stylish typeface. While both papers share the same headline (about David Blunkett and the visa of his former lover's nanny), they are very different papers serving very different purposes. When we look at the headlines in greater detail we can see a difference in the opinions of the two newspapers. The "Daily Mirror" seems to be in favor of Blunkett, making it seem as if someone is out to get him. This is done by the headline, "Dark Forces are out to get me," which indicates that something, or someone has a grudge against him, and wants him to pay. ...read more.

Another reason that "The Times" may have run this picture on the front page is to attract both male and female readers. Females might flock to his picture because of his appearance, while males will be interested in the fact that it has to do with sport. This suggests that the readers of the times are interested in praising the "heroes" while they scold and show their disapproval of the wrong doers. In contrast to this second story of an Olympic hero in "The Times" we get the story of an actress from a soap-opera. This picture is probably there to attract women because of the subject of the article, but I have the distinct feeling that this picture was meant to attract men. I think this because the picture that they chose features her wearing a moderately low-cut dress, and she is making eye contact with whoever is reading the newspaper. I think that this newspaper is presenting this picture of Sarah as the actress who plays her to make her seem more down to earth, even though she is a very famous person who most men couldn't associate with. ...read more.

The layouts tell a lot about the content, further high lighting the differences between the two newspapers. If you look at "The Times" they use a broad sheet which for the most part is text, which gives it the sense of being more informative, while the "Daily Mirror" uses a more compact format, which is mainly composed of pictures. As a whole I would much rather read "The Time" if I wanted to be informed. I believe that people all over the world would agree with me, seeing as this paper is read throughout the world. You can tell that it is read throughout the world by looking at the bottom left corner of the front page. Here you will notice that this paper has prices for all different currencies of different countries. The "Daily Mirror" would be good to read if someone was in the mood for slightly sleazy humor, and if they wanted to be kept up to date on all of the celebrity scandals and such. I do not think that I would be lying if I were to say that "The Times" is the much better choice of an informative newspaper. ...read more.