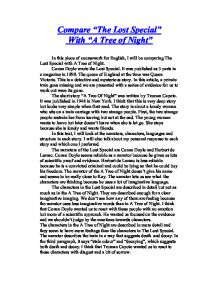 Compare "The Lost Special" With "A Tree of Night" In this piece of coursework for English, I will be comparing The Lost Special with A Tree of Night. Conan Doyle wrote the Lost Special. It was published as 3 parts in a magazine in 1898. The queen of England at the time was Queen Victoria. This is a detective and mysterious story. In this article, a private train goes missing and we are presented with a series of evidence for us to work out were its gone. The short story "A Tree Of Night" was written by Truman Capote. It was published in 1948 in New York. I think that this is very deep story but looks very simple when first read. The story is about a lonely woman who sits on a train carriage with two strange people. First, the two strange people restrain her from leaving but not at the end. The young woman wants to leave but later doesn't leave when she is let go. ...read more.

I think that Conan Doyle wanted us to react with these people with no emotion but more of a scientific approach. He wanted us focused on the evidence and we shouldn't judge by the emotions towards characters. The characters in the A Tree of Night are described in more detail and they seem to have more feelings than the characters in The Lost Special. The narrator describes the train in a way that suggests death and decay. In the third paragraph, it says "stale odour" and "decaying", which suggests both death and decay. I think that Truman Capote wanted us to react to these characters with disgust and a bit of sorrow. We are supposed to hate the two characters on the train but still feel that they know more than we think. The first narrator of the Lost Special uses a lot of scientific language. The language is the type of language used in an investigation. There is no emotional language and uses no slang. ...read more.

The first section tells us about the mysterious disappearance of the private train and introduces the characters. The second section gives us the evidence available and all the theories put forward to solve the mystery. The last section brings out the truth as told by Herbert de Lernac. It puts the mystery to rest and tells us what really happened. I think that Conan Doyle uses the structure successful because there is a good build up to the last section of the story and keeps the reader hooked on reading the following sections of the story. The story A Tree Of Night was originally published as a short story. I think that there is nothing unusual about the structure of the story and it is written with no breaks. It was written so that it would be read from start to the end in one go. I think that I prefer the second story to the first because it has a deeper meaning. I also think that it is more engaging because it uses more imaginative wards. It relates to a deeper emotion than the first story and encourages the reader to get more involved with the story. ...read more.