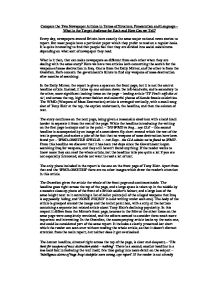 Compare the Two Newspaper Articles in Terms of Structure, Presentation and Language - What is the Target Audience for Each and How Can we Tell?

Compare the Two Newspaper Articles in Terms of Structure, Presentation and Language - What is the Target Audience for Each and How Can we Tell? Every day, newspapers around Britain have exactly the same major national news stories to report. But most people have a particular paper which they prefer to read on a regular basis. It is quite interesting to find that people feel that they are divided into social subcultures depending on what sort of newspaper they read. What is it then, that can make newspapers so different from each other when they are dealing with the same story? Here we have two articles both concerning the search for the weapons of mass destruction in Iraq. One is from the Daily Mirror, and the other is from the Guardian. Both concern the government's failure to find any weapons of mass destruction after months of searching. In the Daily Mirror, the report is given a space on the front page, but it is not the central headline article. Instead, it takes up one column down the left-hand side, and is secondary to the other, more significant looking items on the page - leading article 'TV Paul's wife dies at 41', and across the top, high street fashion and colourful photos of blonde female celebrities. The WMD (Weapons of Mass Destruction) article is arranged vertically, with a small mug shot of Tony Blair at the top, the caption underneath, the headline, and then the column of text. The story continues on the next page, being given a reasonable sized box with a bold black border to separate it from the rest of the page. ...read more.

This makes the Mirror easy and friendly to read, especially while travelling, so it might be something you bought on the way to work and read on the train or a bus. The size of the Guardian is slightly more intimidating. It appears that in general it is men who you see reading the large broadsheet newspapers, and women reading the tabloids. This may be one of the reasons why men assume they are more intelligent than women, but in actual fact it is simply because women are drawn to more petite, user-friendly newspapers that can fit into their handbag, and cannot hold big, cumbersome broadsheets without all the pages falling out. Women understand that it is not very considerate or attractive to have to have your limbs splayed out at arms length with your fists in the faces of the passengers sitting either side of you holding a giant pile of paper which rustles very loudly every time you move it. As has already been mentioned, the main body of the Guardian's article contains a lot more text than that of the Mirror. The language used is also very different. The sentences used in the both Mirror and the Guardian are well-constructed, articulate and to the point. However in the Guardian they tend to be longer, with more complex structures, and they go into more detail. The Mirror you can read quickly, as it is very easy to take in all the facts. It is quite a light read - taking into consideration that it is concerning a somewhat political and depressing matter - as it has left out a fair amount of detail and lists only the most important facts. ...read more.

You will find that a lot of very intelligent people read tabloids for convenience and enjoyment, and similarly some less intelligent people who do not especially enjoy reading will read a broadsheet if there is an issue going on which they are particularly concerned with and want to follow in more depth. Also, although (we trust that) facts in newspapers are accurate, and quotations and statistics are genuine...the ways in which they are dealt with depend very much on the newspaper's own viewpoint. Especially with broadsheet papers, each one tends to support a certain political party, and the angles that they take on their stories are biased towards this. Papers cannot be objective, even if they try to be, because all the articles are written and put together by people, who have their own feelings and opinions about whatever they are writing about. People who buy newspapers regularly get into the habit of reading the one whose attitude is most similar to their own. This is why there is sometimes jokey controversy between readers of differently opinionated newspapers, and papers are stereotyped according to which political party they are biased towards. There are many different ways in which the media can convey news and entertainment to the public, and you can see this very clearly in the different types of newspapers and news articles that people write. Just like any other piece of writing, newspapers are not just written to inform; but to persuade, to entertain, to advertise, to advise, and, in varying degrees of subtlety, to instruct. It is very important to be able to consider carefully the type of newspaper you are reading from and be aware of how it is aiming to affect its readers. ...read more.