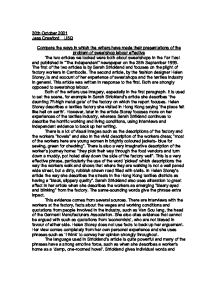 30th October 2001 Jess Crawford U5Q Compare the ways in which the writers have made their presentations of the problem of sweatshop labour effective The two articles we looked were both about sweatshops in the Far East and published in "The Independent" newspaper on the 25th September 1999. The first of the two articles is by Sarah Strickland and focuses on the plight of factory workers in Cambodia. The second article, by the fashion designer Helen Storey, is and account of her experience of sweatshops and the textiles industry in general. This article was written in response to the first. Both are strongly opposed to sweatshop labour. Both of the writers use imagery, especially in the first paragraph. It is used to set the scene, for example in Sarah Strickland's article she describes 'the daunting 7ft-high metal gate' of the factory on which the report focuses. Helen Storey describes a textiles factory she visited in Hong Kong saying 'the place felt like h**l on earth'. However, later in the article Storey focuses more on her experiences of the textiles industry, whereas Sarah Strikland continues to describe the horrific working and living conditions, using interviews and independent evidence to back up her writing. ...read more.

Her view comes completely from her own personal experience and she uses phrases such as 'I think' to convey her opinion strongly throughout. The language used in Strickland's article is quite powerful and many of the phrases have a strong emotive force, such as when she describes a worker's home as a 'damp, one-roomed hovel'. Strickland gives individual words and phrases extra impact by placing them at the end of a sentence or paragraph, separated from the other words, for example when she is describing the way women are treated in the factory, the words 'exhaustion' and 'heat' come on the end of the sentence to give them extra impact. The author also uses euphemisms such as 'bad apples' to imply something that is worse than what is said. In this case it means that the textile industry bosses the writer is talking about are behaving disgracefully. At the end of the article the author quotes a single untrue fact by itself in a paragraph. This has extra impact as it is obviously not true. ...read more.

There is less visual impact in Helen Storey's article. It is compacted into a single page and the headline is simply a statement, 'We must act to shut down the sweatshops'. However, there is a short summary of the article in larger font at the beginning which encourages the reader to look at the article. The summary gives two horrific facts about sweatshops. There is also a line at the end of the paragraph explaining that Helen Storey was a fashion designer, which makes it clear why she knews so much about the textiles industry. In conclusion, I think that these articles are very different. The article by Sarah Strickland is more of a report and is very poetic in its use of language, particularly imagery. Helen Storey's article is very informative and also makes it clear that the situation really is as she writes because she actually says that she has visited the places she describes. However, they both share a common theme, sweatshop labour. ?? ?? ?? ?? ...read more.