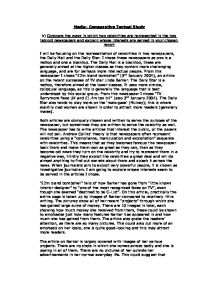 Compare the ways in which two celebrities are represented in the two tabloid newspapers and explain whose interests are served in your chosen report.

Media- Comparative Textual Study b) Compare the ways in which two celebrities are represented in the two tabloid newspapers and explain whose interests are served in your chosen report I will be focusing on the representation of celebrities in two newspapers, the Daily Mail and the Daily Star. I chose these newspapers as one is a redtop and one a blacktop. The Daily Mail is a blacktop, these are generally aimed at the higher classes as they contain more challenging language, and are for perhaps more intellectual people. From this newspaper I chose "�2m bland bombshell" (3rd January 2004), an article on the recent successes of TV star Linda Barker. The Daily Star is a redtop, therefore aimed at the lower classes. It uses more simple, colloquial language, as this is generally the language that is best understood by this social group. From this newspaper I chose "TV Barrymore flees UK and �1.4m tax bill" (also 3rd January 2004). The Daily Star also tends to play more on the 'male gaze' (Mulvey); this is where scantily clad women are shown in order to attract more readers (generally males). Both articles are obviously chosen and written to serve the purpose of the newspaper, but sometimes they are written to serve the celebrity as well. The newspaper has to write articles that interest the public, or the papers will not sell. ...read more.

"TV Barrymore fled UK and �1.4m tax bill" is about how Michael Barrymore has "turned his back on Britain" and gone to live in Hawaii. After various attempts to "revive his shattered career" he has given up and left, apparently leaving a huge tax bill behind. The article is only a half page spread, and a large picture of Barrymore looking sad, perhaps sat kneeling down covers most of this. He has his arms outstretched as if he is pleading with the audience. The caption is "Barrymore begs the crowd in one last attempt at London's Wyngham's theatre". This seems like it could be used to create a sympathetic vote from the audience, however once the article has been read it becomes obvious this was not the plan. Barrymore is only given one page (compared to Barker's two pages) and there is a lot more text on his article. Barrymore fled the UK with his gay lover, this seems to be played on by the newspaper and emphasised as there are implications of gay people being 'bad'. The headlines for both articles only have a few common factors- they both use figures to shock and the titles are in very big, bold letters. The paper uses a play on words in Barker's headline, as the phrase is usually "blonde bombshell". This suggests not only is she bland, she is also stupid (implied by the "blonde bombshell"). ...read more.

The BBC was apparently backing the creation of this book until a "storm of bad press" at which they pulled out. The two articles represent the celebrities in very different ways. Barker is seen as greedy; out to get as much money as she can and that her career will probably be short-lived as people get bored of her, this comes across where it says "Over-exposure is very easily done and if that occurs, the offers will start drying up" and she should "Be careful or the public will get very sick of her". Barrymore comes across as sad, pathetic and needy, especially through the use of the chosen image and the caption of it. A quote that supports this is where it says, "Barrymore's career has self-destructed". In conclusion, in both articles, neither celebrity comes across well. It is definitely the papers whose interests are served in both, as both celebrities offer an interesting story to read. It is quite ironic that the Daily Mail says Barker gets too much coverage, yet they wrote an article on her, therefore giving her more. Barrymore's article does not represent him well and suggests that he is incapable of being famous. Andrew Collins said, "Tabloids feed off the famous to fill their pages". I believe this is very true, as even though they exploit them, without celebrities, newspapers whose main stories are to do with famous people wouldn't have much to write about, therefore would not be as popular. ...read more.