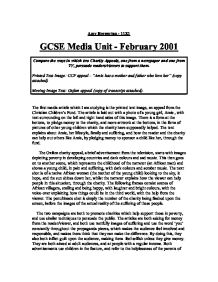 Compare the ways in which two Charity Appeals, one from a newspaper and one from TV, persuade readers/viewers to support them.

Amy Brewerton - 11X1 GCSE Media Unit - February 2001 Compare the ways in which two Charity Appeals, one from a newspaper and one from TV, persuade readers/viewers to support them. Printed Text Image: CCF appeal - "Amie has a mother and father who love her" (copy attached) Moving Image Text: Oxfam appeal (copy of transcript attached). The first media article which I am studying is the printed text image, an appeal from the Christian Children's Fund. The article is laid out with a photo of a young girl, Amie , with text surrounding on the left and right hand sides of this image. There is a form at the bottom, to pledge money to the charity, and more artwork at the bottom, in the form of pictures of other young children which the charity have supposedly helped. The text explains about Amie, her lifestyle, family and suffering, and how the reader and the charity can help out others like Amie, by pledging money to sponsor a child like her, through the fund. The Oxfam charity appeal, a brief advertisement from the television, starts with images depicting poverty in developing countries and dark colours and sad music. This then goes on to another scene, which represents the childhood of the narrator (an African man) and shows a young child, in pain and suffering, with dark colours and somber music. The next shot is of a native African woman (the mother of the young child) looking to the sky, in hope, and the sun shines down her, whilst the narrator explains how the viewer can help people in this situation, through the charity. ...read more.

As in the CCF appeal, this appeal also uses examples of particular people to be featured in the advert, and these people are pictured throughout the appeal. The shots used of these people are of them living in dirty, unhealthy conditions, with few proper clothes. The young boy pictured in the second scene is drinking from a puddle, which would make parents of young children feel sorry for him, and want to donate to the appeal. There are lots of different shots used in the appeal, most of which are shocking to watch. The narrative is read by an African villager, and the tone he uses in his voice is desperate and pleading. However, in the latter part of the appeal, the colours and images used change dramatically. Instead of drab, sad colours and camera shots, there are bright colours and happy voices, and even laughter. This shows to the viewer that this life is a possibility for the villagers, with the money donated to the appeal. Once this has faded, the image of the telephone number (to donate money) is used repetitively. This consists of white writing on a black background, and the two colours contrast, making the writing stand out. The black background could represent the suffering, while the white writing, which includes the number, brings hope to the people. The main difference between the use of graphics in the two appeals is that in the Oxfam appeal there are images to represent not only the suffering of these people, but also happy images, which bring hope. ...read more.

It means that the viewer has no excuse for not donating, because the appeal is long enough for them to find a pen and write down the number, and it is repeated several times, to plant the number firmly in the mind of the viewer. The only reason the viewer would not be inclined to donate after numerous reminders throughout the appeal, would be that they are cold-hearted. I think this appeal manages to make the viewer feel like this very well. The CFF appeal is also very persuasive, but it is mainly the text which is persuasive. Without having read the text I would not have felt inclined to pledge money or to sponsor a child. I do not think it is very eye-catching either, and if I had seen this appeal in a magazine or newspaper I do not feel that I would have looked at it closely. I think the light-coloured page makes it look like a light-hearted issue. If it had been darker, I think I would have found it more shocking upon looking at it for a first time, and may have read further. Although I feel that the idea of using Amie as an example is a good idea, the way it is told makes it sound like a story, and in my opinion it does not sound true. With the Oxfam appeal, they used an actual villager (played by an actor) but I feel that this made it more realistic, because it was being told by an 'actual' person who had experience first-hand the suffering that goes on. For this reason, I find the Oxfam appeal to be more effective. ...read more.