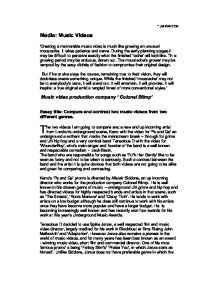 * JM PANTON Media: Music Videos 'Creating a memorable music video is much like growing an unusual moustache. It takes patience and nerve. During the early planning stages it may be difficult to perceive exactly what the finished 'tache' will look like. The growing period may be arduous, drawn out. The moustache's grower may be tempted by the easy clich�s of fashion to compromise their original design. But if he or she stays the course, remaining true to their vision, they will doubtless create something unique. While the finished 'moustache' may not be to everybody's taste, it will stand out. It will entertain. It will provoke. It will inspire: a true original amid a tangled forest of more conventional styles.' Music video production company ' Colonel Blimp' Essay title: Compare and contrast two music videos from two different genres. T he two videos I am going to compare are; a new and up incoming artist from London's underground scene, Kano with the video for 'Ps and Qs' an underground a anthem that marks the mainstream break - through for grime and UK hip hop and a very comical band Tenacious D with the video for 'WounderBoy', who's main singer and founder of the band is a well known and respectable comedian - Jack Black. ...read more.

Just before the lyrics start we can see Kano walk out from the darkness of an alley and into the light from a street lamp. He walks towards the camera and begins to rap (as though he is talking) to us. The camera begins to track backwards with Kano walking forward to us; Kano appears to be moving with the camera, as though he is on the tripod. Tenacious D's video opens as though it were a film, with credits informing whom the director and the band is, the background is of the nights sky and we can see that it is snowing. The establishing shot is of tall snow mountains and a forest, the camera moves quickly into the forest and we can see the band's main singer Jack Black sat on a log. As the lyrics begin Jack starts to sing dramatically but serious - already we can sense intertextual reference to the world - famous film, 'Lord Of The Rings'. Editing is slow and typical of a fantasy/adventure film, camera shots are also very filmic e.g. extreme close - up's of Jack Black, and large bird's eye view shots, that quickly sweep over scenery and closely focus on characters. I also feel that the video has been shot in double time or time and a half to create a slow motion feel. ...read more.

The whole promo only actually uses 92 different camera shots most of which are faded into each other, compared to Kano's 'P's and Q's' which use's a mass of 156 different camera shots which are fast, snappy and edgy (and maybe dangerous for someone who has epilepsy). In conclusion both promos are incredibly unique and directed to the highest standards, none better than the other but just of remarkably different genres and styles. Kano's promo pushes boundaries and throws out stereo - typical clich�s of American, gangster Hip Hop with jewellery, woman and drugs. It too illustrates the wider shift in the way Garage and Grime music is incrementally developing from disposable dance floor music into a far deeper and infinitely more subtle medium capable of expressing the turbulent inner life of Britain's excluded urban underclass - a demographic discovering their own identity and voice through microphones, cheap computer technology and the sawn-of idiom of pirate music. In turn Tenacious D's 'WonderBoy' offers amazing direction from Jonze and incredible theatrical performances from Black and Glass. A comical, yet serious parody lampooning a contemporary media phenomenon - 'The Lord Of The Rings' and at the same time tells a humorous tale of how the band was started. Many critics and viewers found 'The Lord Of The Rings' to worthy and pompous yet Tenacious D and Spike Jonze saw this opportunity to successfully mock it. ...read more.