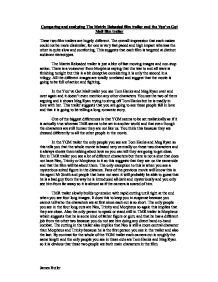 Comparing and analysing The Matrix Reloaded film trailer and the You've Got Mail film trailer.

Comparing and analysing The Matrix Reloaded film trailer and the You've Got Mail film trailer These two film trailers are hugely different. The overall impression that each makes could not be more dissimilar, for one is very fast paced and high impact whereas the other is quite slow and comforting. This suggests that each film is targeted at distinct audience stereotypes. The Matrix Reloaded trailer is just a blur of fast moving images and non-stop action. There is a voiceover from Morpheus saying that the war to end all wars is finishing tonight but this is a bit deceptive considering it is only the second in a trilogy. All the different images are totally unrelated and suggest that the movie is going to be full of action and fighting. In the You've Got Mail trailer you see Tom Hanks and Meg Ryan over and over again and it doesn't even mention any other characters. You see the two of them arguing and it shows Meg Ryan trying to shrug off Tom Hanks but he is madly in love with her. This trailer suggests that you are going to see these people fall in love and that it is going to be telling a long romantic story. ...read more.

Also the only person to speak or stand still in TMR trailer is Morpheus which suggests that he is some kind of father figure or guru and that he has a different job from the other two because you do not see him doing any direct hand-to-hand combat. The cutting in the trailer also implies that Neo is still a more central character than Morpheus and Trinity because he is the first person you see in the trailer and also the last. By contrast for the whole of the YGM trailer each camera cut is roughly the same length and the only people you see in these cuts are Tom Hanks and Meg Ryan so it is obvious that these two people are both main characters in the film. The sounds in the two trailers are also very different yet have one big similarity. Both the trailers have a piece of music playing in the background and although the music is totally different each has a voiceover as well, which shows that they both use the same methods to make the trailers effective and believable. ...read more.

In the YGM trailer the locations always seem to be at their houses or places of work etc, but in TMR trailer there are all kinds of different locations like a highway, a grand lobby and even a Buddhist temple at one point. This suggests that TMR movie will be very exotic, with the characters travelling all over the world. The costumes in the two movies are also massively different as in YGM they are always wearing smart clothes, but in TMR trailer they are always clad in black and normally leather. This connects with what Morpheus was saying about how they are soldiers as this could be their uniform. They also always have shades on which suggests that they have no emotion since you cannot see their eyes; this suggests that they are superheroes, since superheroes are normally portrayed as emotionless, for example James Bond. I think that the reason these two trailers are massively different is that they are aimed at two entirely distinct target audiences. The Matrix is mostly aimed at a mainly teenage male audience which is why the certificate is a 15, whereas the YGM trailer is mostly aimed at females, pre-teen and upwards. James Butler ...read more.