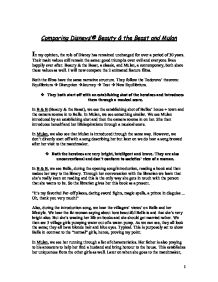 Comparing Disneys'(r) Beauty & the Beast and Mulan In my opinion, the role of Disney has remained unchanged for over a period of 30 years. Their main values still remain the same: good triumphs over evil and everyone lives happily ever after. Beauty & the Beast, a classic, and Mulan, a contemporary, both share these values as well. I will now compare the 2 animated feature films. Both the films have the same narrative structure. They follow the Todorovs' theorem: Equilibrium --> Disruption -->Journey --> Test --> New Equilibrium. * They both start off with an establishing shot of the heroines and introduces them through a musical score. In B & B (Beauty & the Beast), we see the establishing shot of Belles' house + town and the camera zooms in to Belle. In Mulan, we see something similar. We see Mulan introduced by an establishing shot and then the camera zooms in on her. She then introduces herself and her life/aspirations through a musical score. In Mulan, we also see that Mulan is introduced through the same way. However, we don't directly start off with a song describing her but later on we do hear a song brewed after her visit to the matchmaker. ...read more.

This is a typical Chinese soldier. Mulan snatches the rocket away and runs away from the men. She then fires the rocket at the peak of another mountain, which is to the right of the unsuspecting, charging Huns. This causes and avalanche and buries the Huns under a thick blanket of snow. However, the leader of the Huns reaches Mulan and slashes her with his sword before also being buried in the snow. This scene shows that she's brave and also intelligent. She uses her brain to cause the Huns more damage then Shang Li would, with his version of "fight till death". * Both the heroines are prepared to sacrifice their lives for their father and, indeed, do. In B & B, when Belle's father is locked up in the beasts' castle, she goes out venturing to find him. She tells the horse to revisit its' footsteps and take her to the place where her father is. In due time, she enters the dark, scary castle. She finds her way to the dungeon, in a great co-incidence, she finds her father locked in. Also, at that moment, the beast reveals himself. (This also proves my previous point that she's brave because she didn't run away or sth like that...). ...read more.

They're dirty, sweaty and ill mannered. * Both the heroines find the "their man" in the end of the film, the best man. In B& B, we see Belle in the end with the former "beast" who has now turned back into the prince he was with all his wealth and splendor. She gets him rather than the Gaston, who is also handsome and praised by everyone in the village. In Mulan, at the end of the film we see Shang Li approach Mulan's father, supposedly, to ask her hand because we hear the emperor commenting to him about the "once in a lifetime" opportunity he has at hand, which chiefly means 'marry her'. Also, they live happily ever after. In B & B, we see the Belle and the prince dancing in a ballroom, smiling and kissing. Also, the close-ups underline this. Mrs. Pots sings a romantic song, which also reflects the atmosphere. In Mulan, Mulan is reunited with her family and all is forgiven. Shang Li also comes into the scene, to marry her supposedly. Then the camera zooms out and reveals the picturesque scenery implying the happy atmosphere also. Similar beginnings and endings. Both Mulan and B & B start off with a similar equilibrium, then along comes a disruption and causes a change in their lives, because they go on a journey of self-discovery. Ends in 'happily ever after' mode. (REF: Todorov's Theorem) By Kamran Ahmed 1 ...read more.