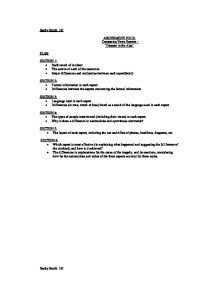 Becky Smith. 10I ASSIGNMENT FOUR: Comparing News Reports - 'Disaster in the Alps' PLAN SECTION 1: * Back round of incident * The source of each of the resources * Major differences and similarities between each report(brief) SECTION 2: * Factual information in each report * Differences between the reports concerning the factual information SECTION 3: * Language used in each report * Differences (in tone, mood or bias) found as a result of the language used in each report SECTION 4: * The types of people interviewed (including their views) in each report * Why is there a difference in nationalities and eyewitness comments? SECTION 5: * The layout of each report, including the use and effect of photos, headlines, diagrams, etc SECTION 6: * Which report is most effective (in explaining what happened and suggesting the full horror of the incident), and how is it achieved? * The differences in explanations for the cause of the tragedy, and its reactions, considering how far the nationalities and styles of the three reports account for those styles Three extravagantly contrasting news reports were written, all concerning the incident of a ski lifts cable being severed by a U.S fighter plane in the Italian Alps, on the 3 February 1998. The reports were written by 'The Times' (a broadsheet paper which is publicised daily), 'The Mirror' (a tabloid paper which is publicised daily), and 'Newsweek' (an American weekly news magazine). ...read more.

Furthermore, there is vivid imagery: " 'The bodies were lying beneath sheets of metal. Most... torn apart' " and explicit detail is given: "tangled wreckage and bloodstained snow". Due to the emotive language, a pacy, dramatic tone and mood is created that shows sympathy for the Italians and resentment against the Americans. The language used in 'Newsweek' (the tabloid weekly publication) is very litotic, particularly the melodramatic headline: "Blood on the Snow". This headline is focusing on the mess on the snow rather than the death of twenty people caused by their military. In the sub-headline there is evidence of national paranoia ("Europe questions America's character") and litotes: "clips". The language is also personal, informal ("Rod... Tom") and vague: "about 300 feet". An unreasonable complaint is made in the first line, which may show their guilt: "Cavalese had griped about the fighter jets that regularly roar up their Alpine river valley." In addition to this the paper attempts diluting the blame by saying that the fighter jets were just "'hot-d*****g'", also claiming that the Italian authorities condone low-flying: "Italian military officials routinely defended low level flights..." Finally, the last paragraph of the report supplies an extravagantly tenuous link: "The pope had personally pleaded for the convicted murderer to be pardoned." This is designed to obfuscate. ...read more.

This may have been done purposefully so that not many people read the article, as the American military doesn't want to appear incompetent or dangerous, obtaining an irresponsible reputation. I think that 'The Mirror' is most effective in explaining what happened and suggesting the full horror of the incident. This is achieved by the remarkably eye catching layout (explained in section five above); the use of dramatic, emotive and aggressive language; and the vivid imagery, and explicit and graphic detail. All these tools successfully encourage the reader to read on and be emotionally affected by the incident. The explanations for the cause of the tragedy in each report are similar. 'The Times' claims that the jet had "been flying 'very, very low'"; 'The Mirror' claims that the jet " 'flew illegally low'"; and 'Newsweek' claims that the "fighter jet clips a gondola's cable". However, the reactions from each nationality in each paper are varied. For example, in 'The Times' the Americans give their "'deepest sympathy'", whereas in 'The Mirror' they claim that " 'the pilot was apparently unaware that he had struck a cable or injured anyone'", and in 'Newsweek' say, "the pilot's flight plan... had been cleared by Italian authorities". This, along with reactions from the Italian authorities and members of the public, shows that 'The Times' is truthful but clear; 'The Mirror' is personal, subjective and emotive; and 'Newsweek' had only the interest of the Americans' reputation in mind. Becky Smith. 10I ...read more.