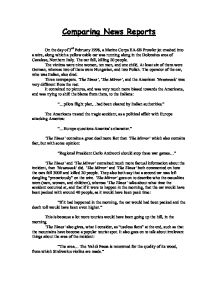 Comparing News Reports - On the day of 3rd February 1998, a Marine Corps EA-6B Prowler jet crashed into a wire, along which a yellow cable car was running along in the Dolomites area of Cavalese, Northern Italy. The car fell, killing 20 people.

Comparing News Reports On the day of 3rd February 1998, a Marine Corps EA-6B Prowler jet crashed into a wire, along which a yellow cable car was running along in the Dolomites area of Cavalese, Northern Italy. The car fell, killing 20 people. The victims were nine women, ten men, and one child. At least six of them were German, whereas two of them were Hungarian, and two Polish. The operator of the car, who was Italian, also died. Three newspapers. 'The Times', 'The Mirror', and the American 'Newsweek' was very different from the rest. It contained no pictures, and was very much more biased towards the Americans, and was trying to shift the blame from them, to the Italians: "...pilots flight plan...had been cleared by Italian authorities." The Americans treated the tragic accident, as a political affair with Europe attacking America: "...Europe questions America's character." ...read more.

'The Times' also gives, what I consider, as "useless facts" at the end, such as that the mountains have become a popular tourist spot. It also goes on to talk about irrelevant things about the area of the incident: "The area... The Val di Fassa is renowned for the quality of its wood, from which Strdivarius violins are made." The 'Newsweek' report, does still have some fact, but a lot more of it, is political facts, trying to shift the blame onto the Italians: "We fly the routs they lay out..." Here, the Americans are clearly trying to shift the blame, by saying that the pilots flying the EA-6B prowler, exactly where the Italians had told them to fly. The main differences between the English papers 'The Times', and 'The Mirror' and the American newsmagazine 'Newsweek', is that there is no pictures or diagrams, helping to explain the incident in the 'Newsweek' report. ...read more.

The English newspapers have at lest two pictures, with captions per report. Both article also maps, which describe where the incident occurred. There are no pictures, captions, or maps in the 'Newsweek' report. The extract is determined as an article, due to how it is split up, with three columns. The most predominant point, or main clause, it the last four words, contained within the sub-headline. "Europe questions America's character" This is the main point, which the Americans are trying to argue in the report, so it is the point that stays in the back of the reader's mind, throughout the report. The article that explains the incident most effectively is the extract from 'The Times'. This is because the report form 'The Mirror' contains a lot of opinion however, this report gets the main points over quicker. 'The Times' contains a great deal of facts, so you could get the most information from this. The 'Newsweek' report is basically a political argument conceived by the Americans about the Europeans.1 Nicholas Goodman 11A PH ...read more.