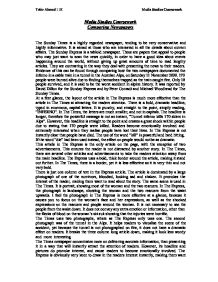 Media Studies Coursework Comparing Newspapers The Sunday Times is a highly regarded newspaper, tending to be very conservative and highly informative. It is aimed at those who are interested in all the details about current affairs. The Sunday Express is a tabloid newspaper. These are papers that appeal to people who may just want to scan the news quickly, in order to have a good idea about events happening around the world, without giving up great amounts of time to read lengthy articles. They are contrasting in the way they deal with presenting the news to their readers. Evidence of this can be found through comparing how the two newspapers documented the inferno in a cable train in a tunnel in the Austrian Alps, on Saturday 11 November 2000. 170 people were burned alive due to finding themselves trapped as the train caught fire. Only 18 people survived, and it is said to be the worst accident in alpine history. It was reported by David Dillon for the Sunday Express and by Peter Conradi and Michael Woodhead for The Sunday Times. At a first glance, the layout of the article in The Express is much more effective than the article in The Times at attracting the readers attention. There is a bold, dramatic headline, typed in enormous, capital letters. It is punchy, and straight to the point, simply reading, "INFERNO". In The Times, the letters are much smaller, and not in capitals. ...read more.

By saying "blaze sweeps packed", it makes it clear to readers that the train was full of people. One can visualise the fire rapidly spreading through the train. The images one gets from those few words are very dramatic. The opening paragraphs from each article are very different. David Dillon of The Express immediately engages the reader, making them feel empathy. His opening statement is as follows: "POLICE face the harrowing task today of identifying 170 young skiers burned alive in a blazing Austrian cable train". He is emphasising the tragedy of the accident, by using words like "harrowing". He then states, "Many victims are believed to be British". This makes readers feel extra concern, as the fact that people from their country have died makes the tragedy feel closer to home, and bring on thoughts such as "that could have happened to me". It is a hard-hitting end to the paragraph, letting that fact sink in. Dillon is really trying to make people feel the pain of the victims by expressing every fact dramatically; "burned alive". Peter Conradi and Michael Woodhead of The Times begin with a long sentence stating the number of people who died and details of how it happened, "AS MANY as 170 people-some feared to be Britons-were killed...". They seemed keen to place emphasis on the number of people who died, by saying "AS MANY as". It is interesting that they should choose to use the word "Britons", as oppose to "British". ...read more.

Because it is an account of a survivor- someone who was involved, it has a more powerful effect on the reader. Conrad and Wood head just tell the factual detail. They do not hype up the stories. This is typical of The Times. The journalism is usually unbiased, fair, and covering all sides of a story. I personally prefer the article in The Times. I feel it gives a more accurate, detailed view of the events. The journalism is less hyped up. I found I did not need over the top language and ridiculously huge headlines to feel emotionally affected by the issue. The facts are enough. I found the eye-witness accounts moving, and the presence of two pictures helped me to visualise the event more clearly. The Express article was less informative. However, it was very dramatic and eye-catching, and the language was very emotive. It gives adequate coverage of the event to inform someone about the tragedy, without making losing people's interest with small details. I found this issue extremely shocking. It always hits me when I hear of so many people dying; so young, in such immense pain. I feel great empathy for the people grieving for their loved ones. It makes me think deeply about how precious life is, and how quickly it cannot be taken away from you. I think what has happened is very tragic. People lost their lives, just enjoying themselves on a skiing weekend. No one can ever be prepared for an event like that, and it will cause much devastation amongst so many people. 1 Tahir Ahmad 11E Media Studies Coursework ...read more.