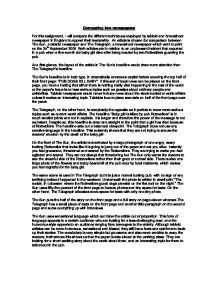 Comparing newspapers,The Sun, a tabloid newspaper and The Telegraph, a broadsheet newspaper which went to print on the 25th September 2006.

Comparing two newspapers For this assignment, I will compare the different techniques employed by tabloid and broadsheet newspaper in England to appeal their readership. An article is chosen for comparison between The Sun, a tabloid newspaper and The Telegraph, a broadsheet newspaper which went to print on the 25th September 2006. Both articles are in relation to an unpleasant incident that occurred in a pub when a five-month old baby girl died after being mauled by two Rottweilers guarding the pub. At a first glance, the layout of the article in The Sun's headline would draw more attention then The Telegraph's headline. The Sun's headline is in bold type, in dramatically enormous capital letters covering the top half of their front page: "PUB DOGS KILL BABY". If this sort of local news can be placed on the front page, you have a feeling that either there is nothing really vital happening in the rest of the world or the paper's focus is on less serious topics such as gossips about ordinary people and celebrities. Tabloid newspapers would never include news about the stock market or world affairs unless it makes an interesting topic. Tabloids love to place scandals on half of the front page over the years. The Telegraph, on the other hand, is completely the opposite as it prefers to cover more serious topics such as current world affairs. The headline "Baby girl is killed by pub Rottweilers" is in much smaller prints and not in capitals. ...read more.

Many questions will have popped up in the readers' mind. The first section is a summary of what has happened. The next section titled "Hysterical" is called a "cross-head" which is common in tabloid newspaper. It describes in a state of hysteria a grief that the baby girl has got killed because of her grandparents' guard dogs which are expected to look after the family and not to kill. The Sun uses colloquial language and slang such as "s****h", "plaything" and "tot" to suit an audience who are possibly less educated and looking for an easy read. The sentences are quite short, simple and effortless for people to understand. The vocabulary is accessible to most people. There are few technical jargons in a tabloid newspaper. Hence, The Sun is called "The People's Paper". The sun uses a lot of "chatty" language and they also use a lot of slang like "tot", "stuns", "living quarters" and "devil dogs". It appeals more to lay people, people that do not have technical jobs. Furthermore, emotive language is frequently used in tabloids through words such as "Beasts", "s****h", "dragged", "desperate" and other similar words causing emotional feelings. Tabloids use more emotive language than slang. The Telegraph uses standard English and has well-structured columns, unlike The Sun which uses a casual language. The Telegraph tends to use more formal language in order to create a better understanding for the readers. ...read more.

A typical tabloid article has a simple and sensational headline, sometimes in the form of a pun, which grabs the readers' attention. The sub-heading is shorter and tends to be vaguer and is therefore open to interpretation, which means the readers have to read on for further insights into the story. The emotive language, used frequently in tabloid articles, is perhaps an attempt to evoke sympathy, influencing the readers' opinions and leading them into forming a more biased perspective. All broadsheet articles are more formal than tabloid articles. This makes them suitable for mature and educated audience who are interested in current affairs and are looking for a more challenging and detailed read. Fact and evidence rather than emotive language are used in broadsheet articles to back up stories. Personal Preference In my opinions, The Telegraph is a better newspaper to read because it gives readers different dimension to a story while The Sun tells the readers what to think. There are much more details in The Telegraph while The Sun has a lot of irrelevant texts. The Telegraph is well constructed although I think that The Sun's heading is much better because it tells me a lot about the incident and the photo of the dogs makes the story even more shocking. Overall a broadsheet reader will have a better understanding of the story than a tabloid reader, although a tabloid reader will get more sensational photos and more gossips about the story because tabloids prefer light topics while broadsheets are serious. For me I do not like reading about unimportant news like the world's biggest pie or something trivial like this. ...read more.