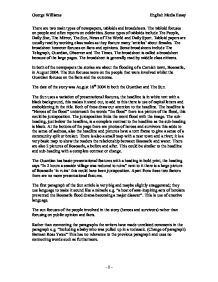 There are two main types of newspapers, tabloids and broadsheets. The tabloid focuses on people and often reports on celebrities. Some types of tabloids include The People, Daily Star, The Mirror, The Sun, News of The World and Daily Sport. Tabloid papers are usually read by working class males as they feature many 'articles' about females. The broadsheet however focuses on facts and opinions. Some broadsheets include The Telegraph, Guardian, Observer and The Times. The broadsheet is called a broadsheet because of the large pages. The broadsheet is generally read by middle class citizens. In both of the newspapers the stories are about the flooding of a Cornish town, Boscastle, in August 2004. ...read more.

At the bottom of the page there are photos of heroes and survivors this adds to the sense of sadness, also the headline and pictures have a torn frame to give a sense of a community split or broken. There is also a small map with a near town and a river; it is a very basic map to show the readers the relationship between Boscastle and water. There are also 2 pictures of Boscastle, a before and after. This could be similar to the headline and sub-heading with a complete contrast or change. The Guardian has basic presentational features with a heading in bold print, the heading says "In 2 hours a seaside village was reduced to ruins" next to it there is a large picture of Boscastle 'in ruins' this could have been juxtaposition. ...read more.

In the Guardian the first paragraph is like the beginning of a novel "Two hours was all it took" In the Guardian the main story is about how and what happened and it uses formal language "The ancient harbour was repaired by inhabitants after storms in 1984" whilst the Sun uses more colloquial language "A holiday maker who saved two dogs by holding one above the water in a flooded flat for 21/2 hours." Unlike the Sun the Guardian has a definite structure where the linking of each paragraph is obviously meant to be like that whilst the Sun seems as if the information is randomly placed. I liked the Sun more visually as it has better presentation techniques although I preferred the content in the Guardian as it was a lot more formal which I thought suited the story more. George Williams English Media Essay - 1 - ...read more.