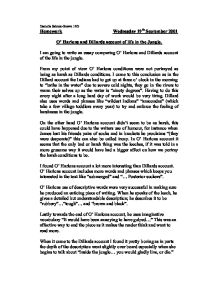 Comparing O' Harlons and Dillards account of the life in the jungle.

Daniella Salmon-Brown 10D Homework Wednesday 19th September 2001 O' Harlons and Dillards account of life in the Jungle. I am going to write an essay comparing O' Harlons and Dillards account of the life in the jungle. From my point of view O' Harlons conditions were not portrayed as being as harsh as Dillards conditions. I came to this conclusion as in the Dillard account the Indians had to get up at three o' clock in the morning to "bathe in the water" due to severe cold nights, they go in the rivers to warm their selves up as the water is "ninety degrees". Having to do this every night after a long hard day of work would be very tiring. ...read more.

In O' Harlons account it seems that the only bad or harsh thing was the leeches, if it was told in a more grusome way it would have had a bigger affect on how we portray the harsh conditions to be. I found O' Harlons account a lot more interesting than Dillards account. O' Harlons account includes more words and phrases which keeps you interested in the text like "submerged" and "... Posterior suckers". O' Harlons use of descriptive words were very successful in making sure he produced an enticing piece of writing. When he speaks of the leech, he gives a detailed but understandable description; he describes it to be "rubbery"..."tough"... ...read more.

Sometimes though the description in the Dillard account is helpful and informative "what is there is interesting...sweat meated-fish" The writers' styles differ in a number of ways from humour to sophisticated vocabulary. O' Harlon uses humour, conversational language, not that much sophisticated words and a variety of vocabularies. When James gets bitten or sucked by the leech at first his friends find it amusing like a joke "in fact James leech suddenly seemed much less of a joke" This means that there was a sense of humour behind the leech story. Dillard however doesn't have any humour in his account. O' Harlon uses a lot of conversational language "ah my best friend..."etc... once again Dillards account doesn't have any conversational language what so ever. Between the two the narrative language differs as Dillard has more sophisticated and complexed vocabulary i.e.: "submerged" "convulsively" "iridescent" etc. ...read more.