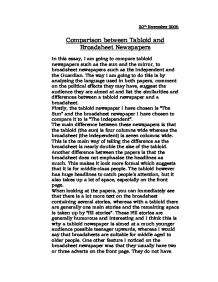 They do not have this on tabloids as they are a much smaller paper and do not have enough room! With broadsheets, referring to the independent, there are three plugs along the top of the newspaper. Plugs are small sentences giving information as to what is inside the newspaper. Although tabloid's still have a plug it is usually just one. With the sun, there is one in the top right hand corner in a star shape which to me is slightly informal and does not make the paper visually look important. Tabloids in general, have the name of the paper - the masthead at the very top of the paper in line with plug. Broadsheets however have the plugs in neat, rectangular boxes all in line at the very top of the paper and the masthead below. The size of the masthead varies between different newspapers but the tabloid mastheads are noticeably larger than broadsheets. ...read more.

Tabloids are usually quite basic in their sentence structures and deliver news in a much more understandable way for younger people. Broadsheets are a lot more formal when using someone's name such as Mr Howard Johnson whereas tabloids would possibly say Johnson or Howard. Broadsheet newspapers also go into a lot more detail regarding politics and other governmental issues. This is because it is a formal paper which the target audience is generally middle aged people. Overall, these two types of newspapers are very different in their layout as well as their language. The broadsheet is a lot more formal and uses syllabic and complicated vocabulary whereas the tabloid is much sensationalised and brevity is used throughout articles. Although both papers generally have the same stories in, they are told in very different ways. Broadsheets are formally told whereas tabloids are informal and in some cases, slang words are used. Because of this, the target audience is different too. Tabloids are for younger people possibly aged between 16-40 whereas broadsheets are generally for 40+. ...read more.