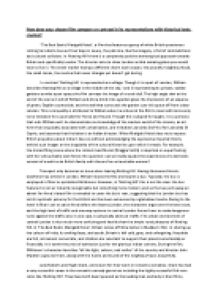 ﻿How does your chosen film compare or contrast in its representations with historical texts studied? ?The Best Exotic Marigold Hotel?, a film that features a group of white British pensioners retiring to India to live out their days in luxury, the plot-line, like the imagery, is full of contradictions and cultural collisions. In ?Notting Hill? there is a completely positive stereotypical approach towards Britain and specifically London. The director aims to show London as that amazing place you would love to live in. The street market having a different charm each season, the peaceful neighbourhood, the small stores, the routine that never changes yet doesn't get boring. In contrast ?Notting Hill? is represented as a village. Though it is a part of London, William describes Notting Hill as ?a village in the middle of the city,? and in representing its private, walled gardens as wide open spaces the film conveys the image of a rural idyll. The high angle shot at the end of the scene in which William and Anna climb into a garden gives the impression of an expanse of green, English countryside, and the wall that surrounds the garden cuts this space off from urban London. ...read more.

Transport only becomes an issue when leaving Notting Hill. Having discovered Anna?s boyfriend has arrived in London, William leaves the Ritz and boards a bus. Typically, the bus is employed in films to symbolise Britishness. However, in ?Notting Hill? this is not the case: the bus featured is not an instantly recognisable but something more modern; and as the bus pulls away an advert for Anna?s latest film is revealed to cover the bus?s rear, suggesting that the London bus has lost its symbolic potency for the British and has been subsumed by a globalised media. Racing to the hotel in Max?s car to catch Anna before she leaves London, the characters argue over the best route, and the high level of traffic and one-way systems in central London forces them to make dangerous turns against the traffic and, in one case, to physically obstruct traffic. The urban environment of central London is thus much more confusing and hostile than the simple rural pleasures of Notting Hill. In ?The Best Exotic Marigold Hotel?, Britain comes off little better in Madden?s film. ...read more.

The rest of the cast, which includes Dev Patel, most famous for ?Slumdog Millionaire??, are equally praiseworthy. The love story of ?Notting Hill? brings together William Thacker, the English owner of a failing travel bookshop, and Anna Scott, an American actor and international film star, and through the ups and downs of their relationship contrasts their lifestyles. Anna?s world is marked by its global scale, its public spaces, and the high mobility of those who inhabit this world, and this is shown to be less desirable than the life of William?s in England, with its local, rural community, and its private spaces. The conclusion of the narrative comes with Anna?s acceptance of William?s lifestyle. In ?The Best Exotic Marigold? sophisticated and sharp in the best tradition of British wit. It hinges on the idea of outsourcing the care and feeding of the British elderly to India. The story deals with a group of British seniors who, for a variety of reasons, leave England and relocate to a dilapidated old hotel in India. ...read more.