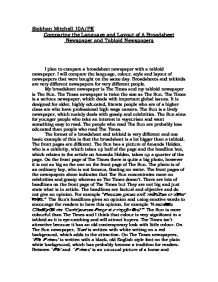 Comparing the Language and Layout of A Broadsheet Newspaper and Tabloid Newspapers.

Siobhan Mitchell 10A/PK Comparing the Language and Layout of A Broadsheet Newspaper and Tabloid Newspapers I plan to compare a broadsheet newspaper with a tabloid newspaper. I will compare the language, colour, style and layout of newspapers that were bought on the same day. Broadsheets and tabloids are very different newspapers for very different people. My broadsheet newspaper is The Times and my tabloid newspaper is The Sun. The Times newspaper is twice the size as The Sun. The Times is a serious newspaper, which deals with important global issues. It is designed for older, highly educated, literate people who are of a higher class are who have professional high wage careers. The Sun is a lively newspaper, which mainly deals with gossip and celebrities. The Sun aims for younger people who take an interest in voyeurism and want something easy to read. The people who read The Sun are probably less educated than people who read The Times. The format of a broadsheet and tabloid is very different and one basic example of this is that the broadsheet is a lot bigger than a tabloid. The front pages are different. The Sun has a picture of Amanda Holden, who is a celebrity, which takes up half of the page and the headline box, which relates to the article on Amanda Holden, takes up a quarter of the page. ...read more.

The Times has higher density of text compared with The Sun. "Gregarious MPs used to the conviviality of evening at the House of Commons are viewing the arrival of a 'working day' regime with dread. They fear a consequent demise of traditional dining clubs." (The Times) The Times would take a longer time to read because the readers will have to think about the articles more. Its main purpose is to inform whereas The Sun's main purpose is to entertain. The Sun also tries to persuade its reader. It uses lots of emotive language and is a biased paper, which has opinion about most of the articles. I have chosen an article to compare from both newspapers. The article is about the funeral of Myra Hindley. Myra Hindley is famous for the Moors Murders, which happened nearly 40 years ago. The funeral was a quiet affair but I will look at how the two newspaper interpret the affair and how they write the article which shows how they want they readers to think and feel about the funeral. A good heading is very important because the first thing a reader looks at is the heading. It should be catchy, short and sharp. It should also give us a taste of the story so we know what it's about. Tabloids usually use puns or play around with words although they haven't in this article. ...read more.

They remained neutral and did not give an opinion. The article was factual and objective. The Sun uses a lot of 'chatty' language and they also use a lot of slang while The Times uses Standard English and has well-structured columns. There was much more detail in The Times while The Sun had a lot of irrelevant text. . The Sun also has more slang because its target audience uses slang a lot while the Times' audience use Standard English. The Times was well constructed. A broadsheet reader will have a better understanding of the story than a tabloid reader will, although a tabloid reader will get better photographs and more gossip about the story because tabloids like gossiping while broadsheets are very serious. In my opinion The Times is a better paper to read because it gives readers different dimensions to the story while The Sun tells the viewers what it thinks. Tabloid readers just want to know the story flat out, while broadsheet readers want to know about the story from every angle. The best newspaper for people who want proper news is The Times. The news is genuine facts. This is aimed at highly educated, literate, high wage earners who take an interest in global news. The Sun and tabloids in general is best for entertainment and to catch up with the latest gossip on celebrities. This is aimed at younger people who want something quick and easy to read. ...read more.