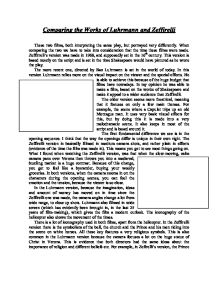 Comparing the Works of Luhrmann and Zeffirelli.

Comparing the Works of Luhrmann and Zeffirelli These two films, both interpreting the same play, but portrayed very differently. When comparing the two we have to take into consideration that the time these films were made. Zeffirreli's version was made in 1968, and supposedly set in the 16th century. This version is based mostly on the script and is set in the time Shakespeare would have pictured as he wrote the play. The more recent one, directed by Baz Luhrmann is set in the world of today. In this version Luhrmann relies more on the visual impact on the viewer and the special effects. He is able to achieve this because of the huge budget that films have nowadays. In my opinion he was able to make a film, based on the works of Shakespeare and make it appeal to a wider audience than Zeffirelli. The older version seems more theatrical, meaning that it focuses on only a few main themes. For example, the scene where a Capulet trips up an old Montague man. It uses very basic visual effects for this, but by doing this it is made into a very melodramatic scene. It also keeps in most of the script and is based around it. ...read more.

and then it introduces the characters. It uses the same font throughout the opening scene, which is very effective considering it is in very bold, white letters. When I realised this, it meant that they used the same font for both families suggesting that they are both the same, both wanting the same things. It also focuses a lot on the two names. This occurs when the camera zooms in on the crests of both families' guns, the number plates on each car and the names in huge neon lights on the two highest buildings in 'Verona'. What struck me the most when comparing the two films is how the music affects the opening scene. The music in the Luhrmann version is a huge, thunderous orchestral soundtrack. This is a perfect background to many huge, quick, sweeping camera shots, as it draws our attention to the vastness of the city. I would say it was a 'gothic' soundtrack, because the music has a great texture and it emphasizes the 'colours' of the city. We see a lot of greys, blues and blacks of the city. I also thought that the music enforces intense emotion, which sets the viewer up for the rest of the film. I found that it set a sense of suspense. ...read more.

both are in smart, expensive, very different clothes and the both stand out in the crowd. They both walk and talk in the same sly, powerful, confident manner. Out of all the Capulet boys, Tybalt would definitely be the first to catch your eye. If you compared the Montague boys to the Capulet boys, in both films, the Montague's are a lot scruffier, relaxed in their clothing, they look and act quite weedy, in a way. Both openings have their own positive strengths and weakness, in different ways. The traditional opening is more accurate as it portrays how the author would have seen the story unfolding in 1595, and the language used is accurate for that period. The downside of this is that it is likely to only appeal to scholars of Shakespeare and purists. The modern version however, appeals to a wider audience. Although not based accurately upon the script and entered into a modern context, which the author could not have imagined at the time and in no way intended, it is likely to appeal to a far greater audience who perhaps were not readers of Shakespeare and wouldn't have understood the older version. Helped by stars such as Leonardo Di Caprio the film opens up a whole new appeal to what was considered an old fashioned and to some, uninteresting story. Laura Bentley ...read more.