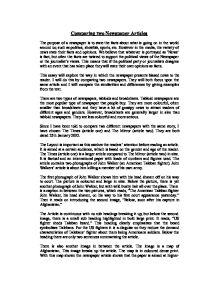 Comparing two Newspaper Articles The purpose of a newspaper is to state the facts about what is going on in the world around us; such as politics, showbiz, sports, etc. However in the media, the variety of news state their facts and opinions. We believe that whatever is portrayed as 'News' is fact, but often the facts are twisted to support the political views of the Newspaper or the journalist's views. This means that if the political party or journalists disagree with an event that has taken place they will state their own opinions as facts. This essay will explore the way in which the newspaper presents biased news to the reader. I will do this by comparing two newspapers. They will both focus upon the same article and I will compare the similarities and differences by giving examples from the text. There are two types of newspapers, tabloids and broadsheets. Tabloid newspapers are the most popular type of newspaper that people buy. They are more colourful, often smaller than broadsheets and they have a lot of gossipy news to attract readers of different ages and genders. ...read more.

This is because of the language and word structure in article two is much more intellectually based, for example "Amid growing concern that powerful pockets of resistance loyal to Osama bin Laden remain in Afghanistan". The words and sentences are longer and more complicated; the sentences also flow more easily. Article one goes into great detail on the situation in hand, it interviews many people and gives you more facts than you can handle. The Times is of a lower case Title with older version print type broken up by paragraphs and picture. The language is very complicated to understand. The words in the sentences don't go beyond seventy words. The shortest words per sentences is no less than twenty five words, and the longest word is about twelve letters long such as 'negotiations' or 'Intelligence'. These sorts of words are complicated to understand and not used in everyday life. It has to be understood that this newspaper broadsheet is aimed at those of an upper class who tend to appreciate the type of news the newspaper reports. For example: the first sentence says, "A RENEGADE army of 5,000 Taleban soldiers with 450 tanks, armoured carriers and pick-up trucks is locked in a tense stand-off with American special forces in Afghanistan." ...read more.

In Article one the language is very simplistic and casual. The sentences don't exceed 18 words, and the longest word is about seven letters long. There is casually use of three syllables or words such as "appeared", "governor", "yesterday" and many more. Again, this is because it has to be understood by a lower class person. You don't need to have a large attention span to read it and the first paragraph usually gives a broad outline of the article. However both the articles are informal but in The Mirror, the article does not go into too many details as it does in The Times. The tone of the article yet again is informative. The article does not provoke fun of the situation by using puns because the news is of seriousness. Yet again this article does not seem to be bias. It is informal and left for your own judgement. Article two has only interviewed a Senior Aide. He was interviewed because he spoke to the new governor of Kandahar about the attack. In my opinion I prefer the mirror because it's simpler to understand what the article is portraying. The language is casual and simplistic. The article gives a brief summary of John Walker and doesn't go into too much detail. By, Kashif Ijaz English GCSE ...read more.