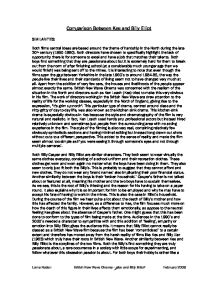 Comparison Between Kes and Billy Elliot

Comparison Between Kes and Billy Elliot SIMILARITIES: Both films central ideas are based around the theme of hardship in the North during the late 20th century (1950-1990). Both directors have chosen to specifically highlight the lack of opportunity there is for someone to excel and have a job that matches their talents. Both boys find something that they are passionate about but it is extremely hard for them to break out from the norm of after finishing school (at a considerably much younger age than we would finish) was being sent off to the mines. It is interesting to note that even though the films span the gap between Yorkshire in the late 1960's to around 1984-85, the way the people live their lives and their standards of living seem not to have changed very much at all. Apart from the addition of very few cars, the houses and livelihoods of the people appear almost exactly the same. British New Wave Cinema was concerned with the realism of the situation in the North and directors such as Ken Loach (Kes) tried to make this very obvious in his film. The work of directors working in the British New Wave era drew attention to the reality of life for the working classes, especially in the North of England, giving rise to the expression, "It's grim up north". ...read more.

Audiences in the 1990's and 2000's needed a character to sympathize with and this addition of 'feeling', empathy or emotion into Billy Elliot gives the audience this. It means that Billy Elliot cannot really be classed as a British New Wave film because the film has been 'romanticised' to a certain extent and therefore has moved away from the harsh reality of films like Kes and Billy Liar (1963) which truly have their roots in British New Wave. Another similarity between Kes and Billy Elliot is the storylines of the two films. Both the Billy's find something they are truly passionate about, a rare occurrence in a society with little scope for experimenting, and follow whatever this obsession passion is about. For both boys their hobby is rather like a release from the monotony of the life they had known and this makes them want to continue their hobby purely for the need of change and excitement in their lives. This is wonderfully represented in the British New Wave genre. Because the genre typically focuses on the nitty-gritty of day-to-day life the audience are given an insight into this monotonous existence and so when the characters find their passion, want them to continue and be successful because they can sympathize with the needs of the character. Nevertheless the outcomes of the two plots are very different. ...read more.

The director of Billy Elliot maybe wanted to prove that even though economy had moved on leaps and bounds for the southern population, it was still unmoving up in the north. The director gave these people a voice in Billy Elliot. Kes hardly shows the distinction between the classes at all, only touches on it with the inclusion of characters such as the careers advisor and the friendly teacher (who can be identified as higher class by the ownership of a car). However, the conflict and stark differences between these classes are not explored in this film. This was the case in many new wave films. Interestingly, only Room at the Top (d. Jack Clayton, 1958) and Look Back in Anger (d. Tony Richardson, 1959) look directly at conflict between working-class and middle-class characters. The later films concentrate on conflicts within the working-class contrasting 'rough' (the very poor, unskilled, criminal and hedonistic - represented by characters like Arthur Seaton in Saturday Night and Sunday Morning (d. Karel Reisz, 1960) and Colin Smith and The Loneliness of the Long Distance Runner, d. Richardson, 1962) with 'respectable' (skilled, aspirational, educated and 'moral' - such as the heroes of John Schlesinger's films: Vic Brown in A Kind of Loving (1962) and the life that Billy Fisher in Billy Liar (1963) appears to lead). ?? ?? ?? ?? Lorna Roden British New Wave Cinema - Kes and Billy Elliot February 2008 ...read more.