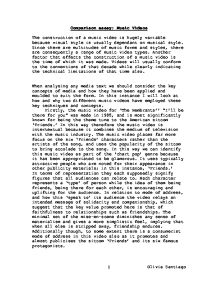 Comparison essay: Music Videos The construction of a music video is hugely variable because visual style is usually dependant on musical style. Since there are multitudes of music forms and styles, there are consequently a range of music video types. Another factor that effects the construction of a music video is the time of which it was made. Videos will usually conform to the conventions of that decade while clearly indicating the technical limitations of that time also. When analysing any media text we should consider the key concepts of media and how they have been applied and moulded to suit the form. In this instance I will look at how and why two different music videos have employed these key techniques and concepts. Firstly, the music video for 'The Rembrants'' "I'll be there for you" was made in 1995, and is most significantly known for being the theme tune to the American sitcom 'Friends.' In this way therefore the music video is intertextual because it combines the medium of television with the music industry. The music video places far more focus on the six 'Friends' characters rather than the artists of the song, and uses the popularity of the sitcom to bring accolade to the song. ...read more.

In contrast to this, George Michael's 'Flawless' video does not use any reputable figures to uphold the song's message but instead disparately uses typically 'unattractive' people as means of implying that versatility and uniqueness is beautiful. The latter video therefore fits this chart video genre/category far more loosely, since it does not present the performer particularly glamorously and has no 'star' as such. George Michael is posed merely as an observer and is seemingly quite passive to what goes on in the room, unlike in 'I'll be there for you' where all are actively involved. The opening sequence of 'I'll be there for you' presents us with the six 'Friend's characters and uses the connotations of these characters to uphold the lyrics of the song. The editing places a still of each character on a heavy beat so they are introduced in a rhythmic consecutive fashion. The effect of this is presenting the characters in a dynamic way as equals; individuals that make up a friendship group, which is shown the in shots that follow where all characters are captured together in single shots. ...read more.

In the Rembrant's song the message is a propos of relationships, where as in George Michael's video focuses more on individual identity and integrity. The same approach therefore has communicated two very different messages. There is however a slightly more structured feel to the 'Flawless' video towards the middle when the group begins dancing in unison to a climax of the music. This is effective in dynamically enforcing their unity in being unique, and portrays a celebration of their differences. This choreographed section creates a more staged effect, which is dissimilar to the 'I'll be there for you' video, which in particular employs a more reflective approach since we are often aware not only of the 'cast/musicians' but of the technical crew and equipment as well. The frame of the shot is therefore extended to give a less staged effect. In conclusion these two videos are generically quite similar but communicate different ideologies and employ different technical techniques, mainly due to the time at which they were made. They both suit the pop musical style, and conform to the conventions regarding the media language of music videos. In particular this includes props, stereotypes and the promoted image. 1 Olivia Santiago ...read more.