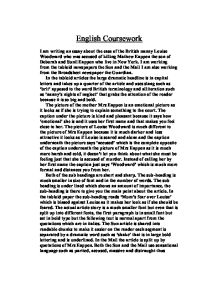 English Coursework I am writing an essay about the case of the British nanny Louise Woodward who was accused of killing Mathew Eappen the son of Deborah and Sunil Eappen who live in New York. I am working from the tabloid newspapers the Sun and the Mail I am also working from the Broadsheet newspaper the Guardian. In the tabloid articles the large dramatic headline is in capital letters and takes up a quarter of the article and uses slang such as 'brit' apposed to the word British terminology and alliteration such as 'nanny's nights of neglect' that grabs the attention of the reader because it is so big and bold. The picture of the mother Mrs Eappen is an emotional picture as it looks as if she is trying to explain something to the court. The caption under the picture is kind and pleasant because it says how 'emotional' she is and it uses her first name and that makes you feel close to her. ...read more.

In the tabloid paper the sub-heading reads 'Mum's fear over Louise' which is biased against Louise as it makes her look as if she should be feared. The actual article story is a much smaller font but even that is split up into different fonts, the first paragraph is in small font but set in bold type but the following text is normal apart from the quotations which are in italics. The Sun article is shared into readable chunks to make it easier on the reader each segment is separated by a dramatic word such as 'shake' that is in large bold lettering and is underlined. In the Mail the article is split up by quotations of Mrs Eappen. Both the Sun and the Mail use sensational language such as partied, accused, massive and distraught thus creating anger and hate towards Louise Woodward in the readers mind, this makes you believe that Louise is guilty before you know all the facts. ...read more.

Unlike the tabloid papers the article is not split up by any words, phrases or quotations that makes it very heavy on the reader's eye because there is so much to read in one go. There is only one picture and that is of Louise Woodward with a caption below that is in a full sentence, which is unbiased it is just a simple fact about Louise in the court. The Guardian only uses Standard English and many medical terms when talking about Mathew Eappen to give much more details about the case. In my opinion I believe that the tabloids are much more biased than the broadsheet papers in their articles they tend to pick sides. The guardian is much more equal and gives hard and detailed facts about each person and their story, they are much more compassionate. I would pick the tabloid paper just because I read papers just for the different gossip but if I was to read a paper for the details about a certain subject I would without doubt choose a Broadsheet. ...read more.